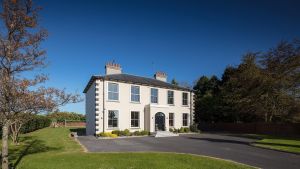 Though the home of the former Leeds fullback was only built in 2007, the property, which extends to 350sq m / 3770 sq ft, has many period-style features including sash windows with working shutters.

Kelly, who is also the uncle of former Ireland and Leeds player Ian Harte, has lived here with his wife and three children since moving back from the UK, and the family now plans to move closer to Drogheda where Kelly was reared.

The house has solid wood panelled doors, architraving and skirting that is sympathetically Georgian in style. Well proportioned throughout it features underfloor heating and a B2 Ber rating .

The five-bedroom property is set on 0.8 of an acre, and in keeping with the traditional style is built with three storeys to the back and two to the front.

There are reception rooms on either side of the front hall, each boasting a stone fire surround. One is a formal sitting room, the other a children’s playroom.

The Georgian influence gives way to a more contemporary set-up in the large double-height kitchen-living-dining room to the rear of the property. A top-of-the-range Scavolini kitchen is set out in an L-shape, with a mezzanine area above from which you can admire the open countryside views.

There are five double bedrooms, three of which are en suite. The master has a walk-in wardrobe leading through to the spacious en suite bathroom with a free-standing bath and a separate walk-in wet room-style shower.

One of two similar detached homes, the other is currently being refurbished. A third property was planned on a third site and the agent expects it will be constructed on at some stage in the future.

More of a townland than a modern day village, Baltray is situated on the northern shore of the river Boyne estuary. While there is no post office or grocery shop, there is a bar called The 19th, a reference to the two fine links golf courses nearby: County Louth, better known as Baltray, and Seapoint Golf Club, designed by professional golfer and local resident Des Smyth.

If golf is your game then number 3 Braghnan, a long fairway walk from the courses, could be where you want to keep your clubs.

The property is asking €995,000 through agent Shane Black Property Advisors.

A Greek chicken souvlaki that is fun, fresh and familiar
9