What’s another €10,000, you think, as the bidding climbs steadily higher

Diary of a Househunter: Our mortgage adviser says they can’t keep up 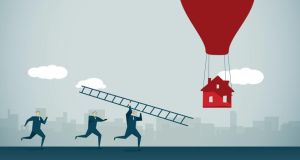 My partner and I began our house hunt fairly tentatively towards the end of last year, when talk of another property bubble was only starting. Now it’s on fire, and we’re at the centre of the blaze, competing with thousands of others searching for a property to call our own in Dublin.

We knew that applying for a mortgage was going to be arduous, but we expected the delay to be at our end, as we completed the endless paperwork, not at the bank’s.

“We’re out the door with all the applications at the moment,” my bank’s mortgage adviser said when I went in for a chat in March. She told me it could take three or four weeks to get approval in principle, and that was after all the paperwork had been correctly submitted. “We can’t keep up.”

After a two-week wait our mortgage was approved, with a lower interest rate, by another provider in April, much to our relief.

Banking & Payments Federation Ireland says that 3,218 applicants became proud holders of mortgage approval in March, the month before we joined them. When you look at how the figures compare between this year and last, and how demand is competing against supply, the growing pressure in the housing market becomes starkly evident.

I quote a lot of figures here, but stick with me; they reveal some worrying trends.

The number of mortgages given the green light in March was up 62 per cent on the same month in 2016. The value of the loans approved rose even faster, by 77.5 per cent.

But the number of loans drawn down, to go ahead with a purchase, is up by just 27.4 per cent.

Thousands more buyers are entering the market, with hundreds of thousands of euro to spend but too few houses to buy. The result: rapidly rising prices

So thousands more eager buyers like us are entering the market every month, with hundreds of thousands of euro to spend but without an adequate supply of houses to buy. I’m no economist, but to me that can mean only one thing: rapidly rising prices.

In the six months we’ve been searching for a home to buy we’ve noticed more and more people at viewings – and an increasing sense of desperation. Other weary househunters swap tales of being outbid and gazumped on properties they had their hearts set on. Rumours of sales closing 10, 20 or even 30 per cent over the asking price are proving true, as those prices begin to crop up on the Residential Property Price Register.

The governor of the Central Bank of Ireland, Philip Lane, has rejected concerns about another housing bubble, but from the inside it’s plain to see where all this is heading. He said the bank’s mortgage-lending rules would act as a brake on property prices.

I’m 32. My partner is 33. Under the Central Bank’s new rules we had to wait until we had permanent jobs before we could apply for a mortgage, which seems logical. Now we’ve got them, and have saved a deposit, we’re ready to go at last. There’s a glut of others just like us, who have also just met the Central Bank’s criteria, and are rushing to market. The big jump in mortgage approvals for first-time buyers – accounting for more than half the total for March – is surely proof.

A report last year also found that one in six homebuyers had been exempted from one of the Central Bank’s rules. Most commonly it was the one about income multiples, which allows homebuyers to borrow more than 3.5 times their income; a significant number also borrowed more than 80 per cent of the cost of their home – or 90 per cent for first-time buyers up to €220,000.

During that initial chat with my own bank the mortgage adviser totted up the figures and said I might be eligible for an exemption, showing me a provisional sum on screen that was, quite frankly, eye-wateringly irresponsible. I doubt it would have been officially offered once we’d done all the paperwork, but still; even seeing such a large sum and being told I might qualify gave me notions.

I was gallivanting around the world when the crash hit Ireland in 2008. My generation was extraordinarily lucky; I’m sure that if I’d been born a few years earlier I’d have been caught up in the frenzy to get a step on the coveted property ladder during the boom, and would probably still be mired in negative equity.

There’s a distinct whiff of deja vu about what’s happening now. Having seen the devastating effects of the crash, we’re wary. But it’s hard not to get caught up in it when you’ve your heart set on buying a house. What’s another €10,000, you think, as the bidding climbs steadily higher.

We’re not being greedy. We’re viewing the house we want to buy not as an investment but as a home.

Six tips to make the most of your garden space
10