Welcome to Sears Salon and its eclectic art 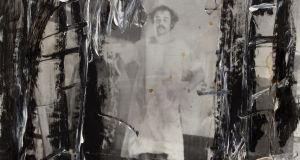 Traditionally, the art market has been divided into two quite separate entities. When artists make new work, it is placed in a gallery, exhibited, reviewed by newspapers and – hopefully – sold. That’s the primary market. Should the buyer of the work subsequently wish to sell it, this is done either privately or at auction: the secondary market.

Yet here is Oliver Sears, opening an initiative called Salon on the ground floor of his Molesworth Street gallery in Dublin. He describes it as “a new framework of exhibition” which contains work by gallery artists alongside that of invited artists and secondary-market works. So while Barrie Cooke’s Works from the Studio exhibition is hanging upstairs, the new space offers some surprising housemates: paintings by Colin Davidson and Hughie O’Donoghue hanging alongside a Picasso sketch, a Lenin collage by Andy Warhol and a Diane Arbus photograph.

The mix of artists is not the only innovation. This, in theory, is takeaway art. You can visit Salon, fall in love with a painting, buy it and bring it home with you. “If you like, it’s the closest to retail you can find,” Sears says. “And in a Dublin context, it’s very difficult to buy works like this outside of the auction world. Where do you go?”

What made him decide to give Salon a start? “We have quite a lot of space,” he says. “Up until last September, both floors would more or less consume whatever exhibition we had on. But that creates some problems. It’s quite a lot of space for an artist to commit to; and if, as an art lover or collector, you’re not interested in who we’re showing, it’s going to be hard to get you through the door to that exhibition.”

“I’ve worn many hats in my 26 years as an art dealer, so the secondary market is something I’ve been heavily involved with over the years. But I had no way of properly displaying secondary market works.”

Salon grew out of another initiative which finds Sears – a Londoner who has spent almost 30 years in Ireland – renting a property in London’s Fitzroy Square for his In Residence shows, where he places work by Irish artists alongside international pieces. “Last year we had four floors, it was a kind of military operation. A huge undertaking.

“But it does something which I think is very important: UK clients who have no knowledge or understanding of Irish artists are able to see where the Irish artists belong. So it’s a very useful exercise and it broadens everything, really. There’s something of some cultural importance going on there.”

Salon, too, offers Irish clients the opportunity to see work by non-Irish artists alongside more familiar names and styles. The downstairs rooms in Molesworth Street are smaller than those upstairs, which is both an advantage and a challenge.

“One of the things I love about this space is that it was a very grand home,” Sears says. “So you can see what art might look like in your home. After all, most collectors don’t have one artist in their house – they mix things.”

Salon is a masterclass in how to “mix things”. A large Hughie O’Donoghue painting greets the visitor with a grand opening statement. Turn right, and there’s an abstract photograph by Idris Khan. The enigmatic Diane Arbus – “they’re like hen’s teeth”, says Sears – hangs opposite Colin Davidson’s marvellously human portrait of the poet Sinead Morrissey, with one of Michael Canning’s epic native wildflower landscapes in between.

In the second room there are, among other works, a Donald Teskey seascape, a birds’ nest cube by Sasha Sykes and a bronze sculpture by the South African artist Conrad Botes.

“Sub-Saharan contemporary art is really on-trend right now,” Sears says of the latter. “He was a founding member of an anti-apartheid mag called Bitter Comix; his best-known medium is actually reverse glass painting. His work is just compelling. It’s emotional, with a really strong narrative.”

Is Salon a vision of the future? Only time will tell. But there can be little doubt it’s a step away from the past.

Six tips to make the most of your garden space
9

What is the going rate for a home in . . . Co Clare?
Real news has value SUBSCRIBE