Two merged Georgian homes on Blackrock's Sydney Ave come with opulent interiors, 8,000sq ft of space and two attics on over half an acre of private gardens 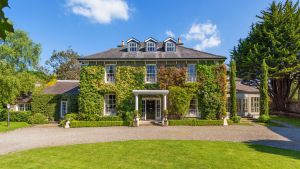 The pond at Eagle Lodge in Blackrock has two new residents; a duck and drake who have moved to the grounds of this very fine Georgian residence on Sydney Avenue, presumably upgrading from their previous home at the nearby Booterstown Sanctuary, to the 0.6 acre of private gardens.

The property dates from the 1820s when it was constructed as a dower house. Previous owners sold the house in 1998, only to buy it back the following year because they missed it so much. It then came to the market in 2008 with an asking price of €10 million. It eventually sold in 2012 for €2.9 million to the current residents who are downsizing.

Previous owners amalgamated Eagle Lodge with an adjoining house, Victoria Lodge, into one property which now offers 745sq m – including the converted attics of the two properties.

The interiors are simply jaw dropping, and though extensive in terms of size, feel more relaxed than opulent – even though vast sums have been spent on the decor.

A Norman Pratt conservatory was added in 1998 – giving the property a sixth reception room. Under this lies a 7m-long cobbled wine cellar with a capacity for over 1,000 bottles and elevator access.

The current residents changed the interiors to a more comfortable family home, removing marble flooring and replacing it with padouk wood from Wilsons salvage yard in Belfast.

The kitchen is vast, and flows seamlessly into the reception rooms making this house ideal for entertaining large numbers. The interconnecting doors from the kitchen to one of the reception rooms have brass fingerplates said to have been originally purchased by Prince Charles for Camilla – and later sold at auction as they were not to her liking.

The master bedroom with its barrelled ceiling takes up an entire wing of the house, and like the rest of the property the attention to detail is outstanding; the television is hidden behind an oil painting over the fireplace which rises at the push of a button. The dressing room is solid mahogany and came from Gleneagles Hotel in Scotland and features a Luton mood lighting system.

The master bathroom has a feel of a Roman baths with the bath itself, installed by previous owners at a cost of €22,000.

There are four more bedrooms on the first floor, and five rooms in the converted attics. There is further accommodation in the guest side of the property – which has a separate kitchen, bathroom and dining area.

The private grounds have mature plantings, a waterfall and lily pond. To the side of the property is an Italianate courtyard garden with a barbecue area, pizza oven and an outdoor Gaggenau grill.

To give them their due, the two ducks now living in the gardens have exceptional taste, as they have chosen one of the finest properties on the market in south county Dublin as their home. Sherry FitzGerald is seeking €4.5 million from anyone wishing to share it with them.