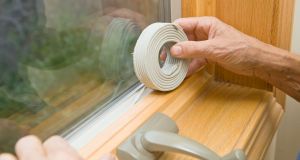 Caulk cord is an efficient option, which can be painted over if required

There’s nothing like an Irish winter to put windows through their paces, especially old glazing where the putty may be brittle and cracked, leaving the glass rattling and allowing the wind to howl in. Sash frames are also prone to shrinking with age, leaving gaps for draughts to sweep in too. Even newer PVC or aluminium windows may have worn-out gaskets and weather stripping, allowing the cold to seep indoors. However, there are a few ways to seal windows short term, or at least to get you through to spring when more permanent fixes could be contemplated.

Caulking cord is a pretty dummy-proof, malleable putty that comes in rolls of strips, such as Frost King F4 Mortite Caulking Cord, €15.50 for 45 ft (13.7m) at hardware stores, and is a fast material for sealing gaps or cracks around windows. Unfortunately it degrades over time but it should buy you a few months at least, and it can be removed easily at a later stage too. To apply, clean all grime off the application site and let dry completely before pressing the caulk into gaps or cracks around windows with fingers and let dry. It can be painted over too, once hardened, if desired.

Replacing or adding additional weather-stripping around the frames is another way to boost draught protection. Self-stick strips, such as Stormguard Extra Thick Weatherstrip, €9.15 for 10 meters from ScrewfFix are easy to use and ideal where nailing isn’t possible, such as on metal, vinyl or warped windows. Simply clean off the site, snip the weather stripping to length with scissors, peel off the backing, and press the strips in place.

Another quick fix is to stretch a layer of insulating plastic film across the interior side of the window frame to make them more airtight. To install, simply pull the film over the frame and fix in place with double-sided tape, until the last step, when you use a hair dryer to shrink the film to achieve an air-tight seal. Obviously, you can’t open the windows when the film is up and it can be a dust collector, but kits like 3M Indoor Window Insulator Kit, 5-Window, €15, or Exitex Glazing Film, €11.99 from Woodies, claim to improve the thermal efficiency of single-pane windows by up to 90 per cent.