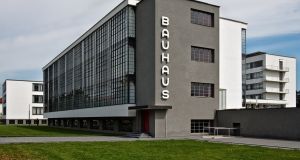 This week kicks off a year-long series of celebrations in the German city of Dessau to mark the establishment of one of the 20th century’s most influential design movements: Bauhaus. Its first director, architect Walter Gropius, first set up the school in Weimar to teach a new way of thinking about design – one that celebrated craft, combined with fine art and engineering. Underpinning its philosophy was that good design could be available to all. While Bauhaus translates as “build house”, the school did not initially have an architecture department. A shift towards a more technology-led approach emerged in 1923 with Gropius’s manifesto Art and Technology: A New Unity, and the buildings that followed – in particular the Bauhaus School in Dessau (where it moved from Weimar) and the designs for the Haus-am-Horn, low cost quick-build family housing, and Hannes Meyer’s pared-back, functional social housing called Houses with Balcony Access – that deeply influenced the modernist movement. The idealism of the Bauhaus was a reaction to the chaos and divisions of the first World War, and the school came to an end in 1933 with the rise of the Nazi party, which was suspicious of its radical ideas and international links. Several Bauhaus buildings are now listed as Unesco World Heritage Sites.