Former dormer bungalow has been transformed making clever use of its generous 0.7acre site 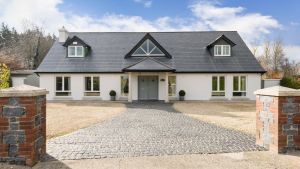 It is often the smallest detail in a home that reveals the extent of thought and planning that has gone into its overall design.

Take for instance the polished black pebbles that frame the extensive wraparound patio at 5 Finnstown Fairways in Lucan, which mimic a border tile inside. It is enough to understand the level of detail that went into the spacious five-bedroom home.

Then again, when the owners are a team of builders whose residential projects include prominent addresses on Dublin’s Shrewsbury and Ailesbury roads, and commercial ventures that include Russborough House, Sir John Rogerson’s Quay and a stud farm for a princess, there has been ample opportunity to gather ideas and inspiration for their family home.

Mick and Rachel Duncan, who founded MJ Duncan & Sons in 1998, purchased what was a dormer bungalow in 2005. But it was the site that was the real selling point as the rear garden is enormous. “I had thought at the time that we would eventually build a house or two for the kids in the garden, but now that they have grown up, they don’t want to live in their parents’ garden,” laughs Mick.

Rachel, who runs the financial side of the business had her eye on the properties in Finnstown Fairways for quite a while. “When we first moved to Lucan 28 years ago I really loved these houses, but our budget only allowed for a two bedroom house in the area.”

Over the years, they have traded up thinking each house would be their “forever home”. Now that the children have moved out, the couple are downsizing – or as some might call it right-sizing as 355sq m (3,821sq ft) is just too much space for a couple.

From the exterior though, it would be hard to guess the extent of the property as it appears quite modest, but nothing could be further from the truth. What this house has – in comparison to its neighbours – is a small front garden but a whopper of a rear garden that backs on to the fields of Finnstown Castle.

The finish is superb, and feels as if it is brand new despite most works being carried out in 2006 – that said there have been three kitchens in the intervening years.

The utility room alone deserves a special mention. Often overlooked in the bones of a house, in reality it is one of the most important rooms for running a large family. Here it is more of a second kitchen. Not only are all the appliances located here, such as ovens, two fridges, and washing machines. It allows the open plan main kitchen (which also has an integrated fridge and hob) and dining room to be remain streamlined and clutter free.

The property has two living rooms; one formal room that opens to the dining space in the garden, and a smaller one used as a music room.

Four bedrooms lie upstairs with the guest room at garden level. Naturally it is the principal bedroom – with a huge en suite, separate dressing room and Juliet balcony – that is the show stopper.

The gardens extend to 0.7 of an acre and have hosted parties for upwards of 70 guests, football matches while the children were growing up, and are also home to three outbuildings – two sheds and a garden room which was a den for teenagers growing up and is now the family gym.

The house will appeal to those on the lookout for a spacious family home with a very large garden, and may appeal to those in the medical profession with the Hermitage Medical Clinic less than a five minute drive. Sherry FitzGerald is seeking €1 million for the property, which is in turnkey condition.