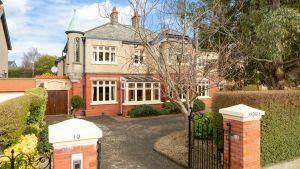 A couple who bought a house at auction in Sandycove, Co Dublin, in 2001 fell in love with its Edwardian-style features, like stained-glass panels in the windows and a wide parquet-floored front hall. It even had a Victorian-Edwardian turret in one corner, built by the original owner to house a statue of Our Lady in thanks for curing his wife’s illness.

In fact Ardlea, at 10 Elton Park, dates from 1928. Owned by one family for the previous 73 years, its original features were intact and the couple were intent on keeping to the style of the house when they revamped it.

Between 2001 and 2003, they extended the house from 230sq m (2,475sq ft) to 390sq m, adding a large kitchen/breakfast room, utility room, conservatory, another reception room (a library) and three fully-tiled en suites as well as re-roofing, rewiring and replumbing the entirety. They adhered to Ardlea’s period values, principally by including stained-glass panels in all the new windows in the house as well as traditional panelled internal doors.

Now the detached five-bed is for sale through Hunters seeking €3.25 million. It has a number of distinctive features apart from the turret. These include a large Art Deco tiled fireplace in the dining room, a sauna beside the family bathroom, an upstairs conservatory outside a bedroom and a large back garden with an original sun dial and a walkway around its perimeter created as a dog walk – the owner previously owned four German Shepherds.

The enclosed front porch of Ardlea has its original mosaic-tiled floor, a front door with stained-glass panels opens through to the parquet-floored hall. On the left is a long drawing room with a white marble Victorian-style fireplace and a dark Junckers wood floor – nearly all the rooms are timber floored, except for the kitchen and bathrooms. On the right of the front hall is the dining room with that Art Deco fireplace opening into the library. A door from here accesses a small tiled lobby with a toilet.

Another door from the library opens into a large family room which has double doors opening at one side into the large conservatory and on another into the very large kitchen/breakfast room. With a tiled floor, timber units, a cream Aga and a vaulted timber ceiling with Velux roof lights it is very much of its era and ready for an upgrade. A large utility room opens off the kitchen, with a door to the back garden as well as a covered side passage.

Upstairs, all but one of the five-bedrooms are doubles. The main bedroom opens into a large walk-in dressing room that could be used as a nursery, suggests the owner. This in turn opens into a large fully-tiled en suite. The turret with its leaded windows is off another double bedroom at the front of the house.

The back garden has a patio, a timber summer house at the end of the lawn and wooden fence separating the lawn from the perimeter walkway. Mature trees include apple and cherry trees, a rubber tree and bamboo.

There’s lots of room to park in the cobblelocked front garden, which has two sets of cast-iron electronic entrance gates.