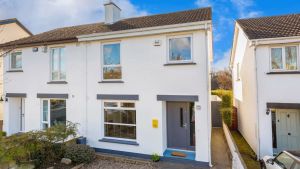 Anyone who has spent time investigating the cost of buying a doer-upper will love number 14 Rowans Road in Wedgewood, one block in from Sandyford Road and accessed via Blackthorn Drive.

The property was designed and extended by its architect owner, Aisling McCann, who specialises in residential extensions.

It is now light-filled and spacious with a formal living room to the front, warmed by a wood-burning stove. It can be accessed via a door in the hall but this entrance is rarely used, the owners preferring to go through from the kitchen.

The kitchen is the property’s main selling point. The house, built in the late 1970s, had been extended when McCann first saw it. The west-facing kitchen was dark, thanks to a poorly designed extension.

McCann began refurbishing while on maternity leave with her first son and estimates it cost about €150,000 to renovate the property to its current level.

The existing extension was demolished and replaced by a clever set-up that treats the working part of the kitchen as one area. A bank of charcoal grey units conceal the larder, fridge and freezer while deep drawers, set below counter, accommodate bins, dishwasher and pots and pans. Set in an L-shape, these counters form a natural border between the kitchen and dining areas. A feature has been made from the painted overhead beam installed to support the construction.

The dining area is now washed in light from four sides – from clerestory windows that bring in southern light, a wall of glazing at the end that faces west, a rooflight overhead and a second wall of glass sliding doors which lead out to the garden.

Behind this is a downstairs shower room and utility room, where there is access to the garden.

Both doors to the garden lead down blue tiled steps, a detail also evident at the front porch reflecting the attention to detail of the build.

The garden is west-facing and private. It isn’t overlooked and has a valuable side access to bring bins out and bikes in. There is also a well concealed shed.

Upstairs, the layout is unchanged. There are three bedroms, two doubles and a single, with a wall of wardrobes in the main bedroom. The family bathroom has a shower in the bath.

There is off-street parking for two cars. The property, which has a C2 BER rating and measures 100 sq m (1076sq ft) is seeking €525,000 through agent Sherry FitzGerald.