Jony Ive’s Bondi-blue iMac was something no one imagined computers could be: fun 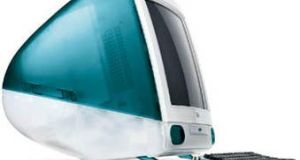 Twenty-one years ago genius industrial designer Jonathan Ive changed the way we see personal computing forever, helped turnaround the fortunes of Apple and launched transparent-coloured plastic as the go-to material for all manner of objects.

Before his iMac, launched in 1998, desktop computers were beige or grey but his curvy Bondi-blue version was something no one imagined computers could be: fun.

Tech was terrifying for most people but these iMacs were simple to use – the “i” in the name stood for internet, still in its infancy – and the iMac famously connected in just two easy steps. As well as being startling looking it was greeted with amazement because it had no floppy discs for storage – in this brave new world the internet would be used to transfer files.

It went on to become available in a rainbow of colours and the design transferred easily to laptops. In 1998 the previously ailing Apple turned a profit for the first time in three years thanks in large part to the iMac and Steve Jobs, with such a forward thinking, appealing piece of technology was hailed as a visionary. The “i” prefix went on to become one of strongest branding features in design history.