Maxed out luxury on the heath in Stillorgan for €995k 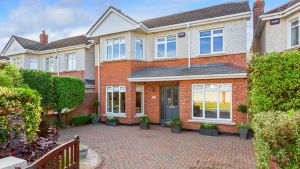 Stillorgan village and its mature surrounding estates are well equipped for growing families, from good neighbouring schools to Kilmacud Crokes GAA club, one of the biggest and most competitive clubs in Ireland, to a growing selection of local restaurants and cafes. There’s also the shopping centre, which has survived flashier competitors and undergone a recent revival, and a good selection of family-friendly housing stock.

Number 121 Stillorgan Heath is in a mature Shannon Homes development located just off St Raphaela’s Road, about a 10-minute walk from the village and the local Green Line Luas stop.

The owners of the detached, four-bed property bought into the estate off plans when it was being constructed in 1995, and later traded up within the development, moving into number 121 a few years later.

Since then they have further extended so that it now runs to a sizeable 223sq m/2,400sq ft, and that’s excluding a huge attic room which has a further 34sq m/365sq ft.

There are three principal rooms on the ground floor; a home office or den to the right of the hall, a living room with open fire and bay window to the left, accessed through double doors, and to the rear is a large open-plan kitchen, dining, family room. With a double apex roof, a wall of glass overlooks the 8m wide southwest facing garden. The design, by local architect Frank Elmes, is extremely roomy with space for not one but two, duck-egg blue velvet sofas, sourced in EZ Living’s flagship store just up the road in Sandyford Industrial Estate.

The kitchen units, painted Ball Green by Farrow & Ball, were made to a design by Blackrock Kitchens that includes secret compartments on either side of the Rangemaster double oven and a keyhole-shaped breakfast bar island.

There are several “engine rooms” too, including a utility with side-door access, a guest toilet with double sinks and a boot room for coats and footwear. The place is impressively clutter-free but the owner admits to using the first lockdown for a big clearout and a paint refresh.

The stairs have smart panelling and there are four good double bedrooms on the first floor landing, two en suite. The main bedroom is to the rear and overlooks Stillorgan Reservoir, which Irish Water is currently upgrading with works due for completion in 2022. You can also see the Dublin Mountains from here.

At the top of the house is a large attic room with enough space for sofas to lounge on and built-in desks, a feature of every bedroom.

The garden is really beautiful. Facing southwest, it gets plenty of sun, is smartly landscaped and is laid out in lawn. The current owners had toyed with the idea of building a garden room but avid sailors they have decided to move further east and closer to the sea.

The property, which has off-street parking for several cars, isn’t overlooked to the front and is located within a few minutes walk of both a primary and secondary school for girls. With an impressive B2 Ber, number 121 is seeking €995,000 through agent Vincent Finnegan.