Monkstown square living with a downstairs earner for €1.795m

Three-bed flat with separate living room and kitchen is rented for €2,500 per month 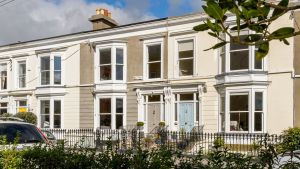 It you like period charm and proximity to the sea then Monkstown’s Belgrave Square has it all. This part of the city boasts a long stretch of coastal walks, lookout points and green spaces as well as one of the city’s most popular swimming holes, an activity that has thrived as a revitalising form of exercise under lockdown.

The square, built in the 1850s, is a five-minute walk from Seapoint Dart station and the newly installed cycle lane makes the main road a pleasure for those on two wheels, running almost all the way into the city centre.

It was proximity to the Dart station that attracted the owners of number 4 to the three-storey terraced house in 2019 after they returned from London. They paid €1.65 million for it, according to the property price register. As well as beautiful period features such as decorative cornicing, huge sash windows with shutters and ceiling heights of 3m at hall level and 3.2m in the first floor reception, the garden level has a self-contained, three-bed flat with separate living room and kitchen that they rented for €2,500 per month.

They chose the best room in the house, the upstairs front room – or piano nobile – as their main living room. Overlooking the square, its windows, one a large bay, wash the space in light, highlighting its sugarcraft cornicing and framing the square’s lovely seasonal views.The private green space is shared by the keyholding residents of the square. Warmed by its sunny aspect the lounge is set around a marble fireplace, which still has servant bell pulls on either side.

The room to the rear of the living room is used as the main bedroom. The plan had been to knock through the partition wall and install the kitchen here to make the most of the best rooms in the house. It has partial views of the sea and a window ledge has been extended and cut to create a window seat with storage below.

At the top of the house on the return is a second double bedroom with shower en suite.

The two reception rooms at hall level are used as home offices for both owners who have been working from home since March. No longer needing proximity to commuter services has prompted their decision to move further out of the city.

The kitchen is on the hall floor return. When you consider the overall size of the house, 321sq m (3,455sq ft), it is a small space with units lining its two outside walls. It has a Fischer Paykel range cooker and double doors that lead out to a small balcony where steps lead down to the granite-walled, north-facing garden. The next owner might install the kitchen at garden level where the three-bedroom flat is located.

The garden is wide and private, has an apple tree at its centre and pedestrian rear access on to Trafalgar Lane. There is planning precedent along the row for rear-entry parking. Otherwise it is on-street disc parking to the front.

The property, which is Ber exempt, is seeking €1.795million through agent Knight Frank.