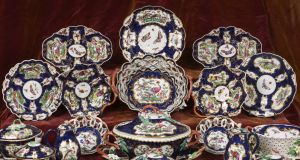 A selection of pieces from the dinner and dessert china decorated in the Lady Betty Cobbe pattern, soft-paste porcelain, from the Cobbe Collection. Photograph: Alexey Moskvin.

Birds, Bugs and Butterflies: Lady Betty Cobbe’s ‘Peacock’ China: The exhibition at the State Apartments in Dublin Castle, which runs until February 16th, explores the porcelain collection of the 18th-century aristocratic Cobbe family of Newbridge House in Co Dublin.

The Palladian villa located in Donabate, which was transferred to Fingal County Council in 1985, boasts interiors that are among the best preserved in the country and is open to the public.

Accompanying the exhibition at Dublin Castle is the wonderfully illustrated book of the same name written by Alec Cobbe, a descendant of Cobbe family who curated the exhibiton.

It is the culmination of 30 years of research and reassembly of his family’s Irish service of Worcester porcelain. Having been told in his youth by an elderly aunt that the Cobbe service was sold off “plate by plate” and later in 1986, when he saw a Cobbe knife and fork for sale at a London auction house, Cobbe knew he “was going to attempt to reconstruct the lost service.”

It all began in 1763 when his ancestor Lady Betty Cobbe started her elaborate dinner service collection, which grew to an estimated 500 pieces, as it was employed at her three residences. By 1882, however, it had fallen to 322 items and in 1920, the 150 remaining items were sold in 40 lots at a London auction. One lot at the auction - a collection of 24 silver knives and forks - sold for £199, the equivalent of €9,000 today.

A valuation of Newbridge House in 1914 listed the collection, despite it having diminished from one of the largest collections on record from a British porcelain factory, as one of the most valuable of the family’s heirlooms. It was valued at £1,200, or €150,000 in today’s money.

During the mid-1700s there was no porcelain manufactured in Ireland and the Worcester factory had just opened. Lady Betty and her husband Thomas would make the crossing by boat from Dublin – which took anything from 14 to 49 hours – to Holyhead and on to Bath where they had a home, passing through Worcester where they befriended Dr John Wall who had just opened the factory in an attempt boost employment in the town.

What makes the Cobbe collection very special is that pieces of Worcester porcelain were fitted onto Dublin cutlery, made by Thomas Read’s establishment on Parliament Street. Clem Kenny, the Longford businessman who completed the magnificent restoration of Read’s, and who recently won the Diaphoros Prize from the British Georgian Group for the restoration Dublin’s oldest shop, presented Alec Cobbe with 18th century cutlery which were found under the floorboards during the restoration that now replaces some pieces lost over the past 250 years.

The Cobbe’s clearly entertained quite a bit, as the settings were made for 36 people with plates, bowls and specific cutlery for a multitude of courses.

The notion of place settings for formal dinners in the late 17th century was based on a French practice, which became known as Service à la Française.

The book suggests that King Louis XV of France, who possessed some porcelain-handled cutlery, did not have cutlery to match his dinner sets as is the case with the Cobbe collection, reiterating the significance of this Irish collection.

The pattern chosen by Lady Betty came to be regarded by historians as “the epitome of Worcester decoration” and “probably the earliest instance of exotic birds”, which feature along with ladybirds, dragonflies and beetles. One of the most striking features is that of a swooping bird, which is reminiscent of stucco work in the drawing room at Newbridge House.

Knowledge of the natural world and exotic species coincided with the opening of the British Museum in 1759, and later enhanced by colour plates in books on natural history. Thomas and Lady Betty were fascinated with this curious world having spent significant sums on exotic birds and cages, in addition to a museum in Newbridge House with displays dedicated to insects, butterflies and dragon flies. It is no wonder that their interests in this realm impacted on the design of their porcelain.

A small woodcut featured in Cobbe’s book, of the painting room in the Worcester factory from 1752, depicts lines of artists busy painting delicate pieces of porcelain. Gilding on the ware is quite incredible, given it is almost 250 years old and painted by hand, and where gold was mixed with honey to allow the precious metal to be workable and applied with a brush.

Cobbe has reassembled a good deal of his ancestral collection, some pieces have been lost over the centuries, and others are on display through museums throughout the world.

The fascinating story of this very rare and important dinner service is recounted in detail in his book Bird, Bugs and Butterflies: Lady Betty Cobbe’s ‘Peacock’ China alongside the eponymous exhibition at Dublin Castle. See dublincastle.ie and newbridgehouseandfarm.com.