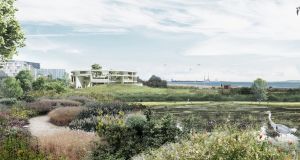 Dublin is changing at a near breathless pace, with a profusion of new office blocks and hotel schemes springing up in the city centre and suburbs, putting the capital’s natural environment under significant pressure.

There are still some bright spots for nature, however, such as the bird sanctuary at Booterstown Marsh, between the Rock Road and the sea in south Dublin.

In the Celtic Tiger years, builder Bernard McNamara proposed to build 53 luxury apartments on the lands adjacent to the marsh, but that plan was rejected by An Bórd Pleanála in 2003.

Now, a development proposed by Press Up Entertainment Group chief Paddy McKillen jnr has been formulated with one eye on the natural amenity on its doorstep.

The businessman has applied to Dublin City Council for permission to build a luxurious spa and gym facility with both indoor and outdoor swimming pools on the 2.9 acre site. And some 7,158 sq ft of the proposed 60,000 sq ft five-storey structure would be set aside for use as an interpretative centre on its upper ground floor and mezzanine floor levels.

While the planners in Dublin City Council and Dún Laoghaire Rathdown have yet to arrive at a decision on McKillen jnr’s application , the proposal attracted a small number of observations from third parties.

In a letter to Dublin City Council, one local resident says that, while he has “no problem with developing this site per se . . . I do have a problem with a 60ft building between the current houses and the sea right beside the only surviving tiny piece of salt marsh left in Dublin.”

The writer concludes by observing that: “I think the guests that would stay at the very high new development of the Tara Towers [hotel] site deserve some view of the sea for what they will be charged.”