Planning permissions for apartments up 80% after guideline changes 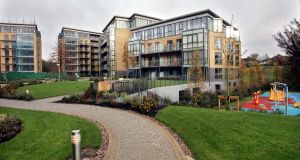 The figures from the Residential Tenancies Board suggested the average monthly cost of rent nationally is now more than €1,200. In Dublin, average rents were €1,762 in the third quarter. Photograph: Matt Kavanagh

Planning permissions for apartments have risen by 80 per cent in the past year, according to the Central Statistics Office (CSO).

The increase in permissions comes on the back of an overhaul to the apartment planning guidelines in March 2018, which made it more economic for developers to build.

This represented an overall increase of 32 per cent on the same period last year, comprising an 80 per cent hike in apartment permissions and a 1.1 per cent increase in house permissions.

The figures show one-off houses accounted for nearly 31 per cent of all new dwelling units granted planning permission in the third quarter.

Separate data published on Wednesday show average monthly rents across the State rose by 8.2 per cent on an annual basis in the third quarter despite the Government’s rent caps.

The figures from the Residential Tenancies Board suggested the average monthly cost of rent nationally is now more than €1,200. In Dublin, average rents were €1,762 in the third quarter, up 6.6 per cent year on year, which was above the Government’s rent pressure zone cap of 4 per cent.

The Irish Property Owners’ Association said “continual interference” in the private rental sector had resulted in less accommodation being available for rent, contributing to homelessness.

It said there was a drop of 17 per cent in the number of tenancies registered in the third quarter. “Rent pressure zones limit the income of investors without limiting the cost of the provision of the accommodation,” it said. “Property owners who rewarded good tenants by keeping the rent low, have been unfairly and substantially disadvantaged.”

Minister for Housing Eoghan Murphy has, however, insisted the Government’s policy of rent caps is working, noting that the rapid growth in rents was moderating in Cork and Dublin.

The jump in apartment schemes has been linked to a change in the planning requirements. Last year, Mr Murphy eased rules around the minimum apartment size guidelines.

The requirement for car-parking spaces was removed and the cap on the number of units allowed on each floor increased. The original dual-aspect stipulation – the necessity for apartments to have windows on two walls – was dropped.

Height restrictions on residential buildings were also altered to allow for easier construction of high-rise developments in cities.

At the time, Mr Murphy said the measures would address a number of challenges including making it more cost-effective to build apartments.

Several economists have linked the State’s housing crisis to a shortage of apartments, not houses. The distinction is crucial to understanding the severity of the problem, they say.

In other European countries, apartments typically account for 30-50 per cent of the housing stock, but in the Republic they currently account for just 10 per cent.