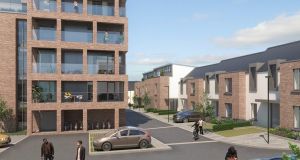 Developer Homeland Group is seeking planning permission to demolish a mansion at Stillorgan Park, south Dublin, and to construct 67 homes on its lands.

Ard na Glaise is a 400sqm (4,300sq ft) house that is not a protected structure, occupying a 0.81 hectare (2 acre) site bounded by the Orpen and Coppinger housing estates and conveniently situated a short distance from the N11 dual carriageway.

Listed house builder Cairn Homes first acquired the Ard na Glaise site in 2015 for €5.45 million but subsequently reclassified it within its portfolio as being “non-core” to its business, focusing instead on larger sites, and opted to quietly sell it to Homeland for an undisclosed sum.

While Cairn’s investor reports do not specify the price achieved for each site sold, the company generated revenues of €14.4 million in the first half of 2018 including the Stillorgan site.

The proposed Stillorgan Park development is Homeland’s second large project in the area.

In nearby Leopardstown, Dublin 18, the developer quietly acquired St Joseph’s House in February 2016 and entered into agreements with neighbouring home owners to assemble an overall site of 1.65 hectare (4.1 acres).

Planning permission was sought in 2017 for a development of 133 apartments and six houses on the site and a final grant of permission for the scheme, which is expected to be named Berwick Pines, was obtained last year.

St Joseph’s House, currently a residential community for deaf and deafblind adults, was acquired from the Catholic Institute for Deaf People (CIDP), who told The Irish Times in 2017 that the building would continue to be occupied by them under a five-year lease set to run until February 2021.

According to CIDP, the sale to the developer formed part of its strategy to move residents of St Joseph’s House closer to the Deaf Village Ireland complex in Cabra.