Escape to this contemporary seaside haven for €3.1m 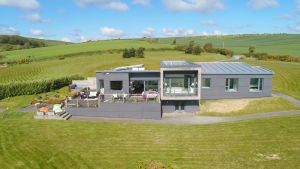 Half hidden from the quiet country road which climbs above the charming swimming spot at Sandycove harbour, and leads eventually to the famous Old Head Golf Club and beaches at Garretstown, Avalon is something of a surprise.

The houses in these parts are either Georgian, or the ubiquitous but sizeable west of Ireland dormer bungalow. Not Avalon – this striking, long, low modernist design, by architect John Morehead, is utterly unique.

“We wanted a haven,” says the owner who, with her husband, commissioned the house 12 years ago. In the aviation business, he travels a great deal, so somewhere with a welcoming sense of security was high on the family list. She tells me about the Arthurian legend of Avalon, as she brings me in, past the muted grey façade to a house that opens up to a vast panorama of headlands, cliffs, the wild seas and the sweep of the Kinsale coastline beyond.

Avalon was where King Arthur went to recover from his battles, and so became the perfect name for the house which is both retreat and a remarkably practical, though also epically luxurious, family home.

A 10-minute drive from Kinsale, which is itself just 20 minutes from Cork Airport, and half an hour to Cork city, the house has four bedrooms, but has been designed to accommodate more.

In the current layout, which extends to 297sq m (3,200sq ft) of living space, an open plan hall/dining area widens to a kitchen and sitting room, that leads out to a deck, where the owners love to eat breakfast on sunny mornings.

A cosy conversation pit/screening room is situated off the hall, as is a boot room, which also does service for drying wetsuits when the family’s two children come in from kayaking, sailing or surfing at the nearby beaches.

If that sounds like a dream lifestyle, there’s more. The clever design sees the ceilings in the living areas subtly sloping up, to add a sense of space and drama to the views, while in the four bedrooms, there’s an almost imperceptible slope down, making them cosy and relaxing for sleep. The main bedroom suite has a wow of a bathroom, with a steam room /shower, and a huge bath that – because you’re not overlooked in this idyllic spot – has an enormous window for soaking up the views while you soak in the tub.

There is an additional study and breakout space that could just as readily be reconfigured as extra bedrooms, while at the lower level a completely separate space is used as a garden room/den. This is fully plumbed, so would make an ideal au pair flat or separate visitor quarters if needed.

With a flair for the dramatic, and for entertaining, the owners created decking areas in the two acres of grounds to capture the sun all day long. There’s added luxury whatever the weather with an outdoor hot tub and fire pit. The outside can be fully illuminated, while inside is set up for mood lighting.

There’s a generous garage to one side where you could easily imagine James Bond drawing up in his Aston Martin, and, to add to that movie star vibe, the grounds have been landscaped to screen the house completely from the road. This has had the effect of also creating a natural amphitheatre. This comes in to service on summer nights, when the façade of the house can double up as a huge outdoor cinema screen. After putting all that care and attention into the design of their house (as well as into many subsequent parties), the owners are now selling as work is taking them abroad.

Ardbrack and Scilly, on the other side of Kinsale, are often known as the Golden Mile, with prices to match: Scilly Hill sold for €2.55 million in December of 2018; but Sandycove is a far more peaceful, secluded and exclusive proposition. A true one-off, Avalon is for sale with Sherry Fitzgerald for €3.1 million.