The owner / landlord of a Dublin 4 house has recorded footage of the property after the departure of the tenants. The footage shows large amount of waste left behind as well as filthy work surfaces and flooring. 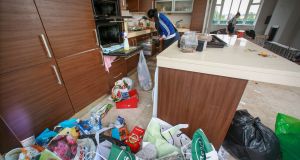 Cleaning up a house in Dublin 4 after it was vacated by a tenant who left it in a squalid and damaged state while owing €55,000 in rent arrears. Photograph: Crispin Rodwell

A rubbish-strewn kitchen. Pet faeces in the living area. A marble bathroom destroyed by hair dye; rent arrears of some €45,000.

Yes, while soaring rents and a lack of affordable property are causing major problems for tenants, landlords, too, have their challenges, as evidenced by the experiences of the landlord of this Dublin 4 property.

In 2017, the experienced landlord let the house out for €3,300 a month. All was fine for the first eight or nine months, until the tenant stopped paying their rent in around April of last year.

The tenant however, wouldn’t comply, and so the landlord lodged a case with the Residential Tenancies Board (RTB), an agency established to resolve disputes between tenants and landlords.

It came to adjudication – a process which took some six to seven months, with unpaid rent of €3,300 clocking up each month – and the ruling went in favour of the landlord.

But the tenant, as is their right, appealed this, and the case was then submitted for a tribunal hearing – a date the landlord is still awaiting.

“And you can’t do anything until you have the tribunal hearing, you can’t get them out,” the landlord says.

Coinciding with this, the tenant took a claim for discrimination against the landlord to the Workplace Relations Commission. If the WRC had found in favour of the tenant it would have resulted in a €50,000 fine – but it didn’t.

Other delays also ensued, such as paying an arbitrary amount of rent to the wrong account, and sending such cheques to the agent rather than the landlord; tactics which the landlord believes were designed to delay the process, before the tenant finally decided to leave earlier this month – having lived in the property rent free for more than a year.

Now the landlord is still awaiting a tribunal date – a landlord can’t get a court order to evict without going through the tribunal first – and says it will cost “at least €50,000” to put the house right.

In the meantime, the bank is pursuing mortgage arrears and is talking about assigning a receiver to the property.

“I don’t believe they should be able use the system to stay in a property rent free,” the landlord says, adding that even if the RTB rules against the tenant at the tribunal, pursuing the unpaid rent may require going to court to get a judgment against the tenant, and then hiring a private investigator to track them down.

Are you affected by
the housing crisis?

This landlord’s experience appears to be far from the exception. While in the UK it’s possible to pay an extra 4-4.5 per cent to insure yourself against rent arrears, no such product currently exists in Ireland, which can leave landlords vulnerable.

Indeed, tenants not paying rent is something PJ McCann, managing director of Meath-based agent McCann & Curran, comes across once or twice a year.

“It’s something you experience no matter how deep your reference search is,” he says, citing the recent example of a landlord who wanted to sell a property.

The lease agreement stated that he had to give just two weeks notice for such an event if it occurred in the first six months of the contract. With a buyer in the frame, notice was duly given, but the tenants “stuck their heels in and said they weren’t moving”.

They subsequently came back and looked to be reimbursed for the outstanding amount on the lease agreement – which came to about €10,000 – for having to move.

The RTB’s advice was to begin a dispute process, but the landlord couldn’t wait as they wanted to sell.

“The landlord genuinely had a sale on the house,” McCann says. But the tenants wouldn’t move until the dispute process was completed, and he couldn’t go ahead with the sale until the property was vacant, so he ended up having to pay them off.

While acknowledging the current housing crisis, and the difficulties faced by tenants in terms of ever-increasing rents, Garreth McCarthy, a director with GMC Auctioneers in Waterford, also has issues with how landlords are being treated.

“It’s a renter’s market in my view; as landlords/owners/agents we have absolutely no autonomy. We have no controls over the situation when something goes bad,” he says, adding: “It’s a tenant favoured system, it’s not a fair system”.

The RTB says this is not the case, noting that the most recent figures, for 2017, show that there was fairly equal distribution of awards of damages between landlords and tenants, with 47 per cent in favour of tenants, and 53 per cent for landlords.

It also notes that just as it prioritises certain issues for tenants – such as alleged illegal evictions – it does the same for landlords, in cases of rent arrears, and “overholding”, whereby a tenant has not moved out after receiving valid notice of termination.

While rent arrears isn’t so much of an issue in Waterford, “you get the odd one or two”, McCarthy had a recent experience with a landlord where a tenant finally left a property three days before a sheriff was due to arrive to evict them. It was two years since they had last paid rent.

“And the house was absolutely wrecked,” he says, adding it probably needs €20,000 to be spent on it.

Meanwhile, his client has decided not to chase the tenant, as he doesn’t believe he stands a chance of recouping any loss.

Indeed, many landlords say that the burden of blame for tenancy issues lie with the Residential Tenancies Board (RTB), which took over oversight of tenancy disputes from the courts back in 2004.

“The RTB favours tenants playing the system,” says Reilly, pointing out that while the majority of tenants are “decent”, a small minority are causing “real hardship” for landlords.

McCarthy agrees. He believes the RTB should be “scrapped, and a property governing body needs to be set up”, while McCann suggests creating an alternative to the RTB, which would offer better representation for landlords.

“We need a complete overhaul of the whole system,” McCann says, pointing out that the average waiting time for a dispute to be even filed is six weeks before you might get a response from the RTB. And another six weeks before it moves on from there and so on.

The RTB disputes this time frame however, arguing that in 2018 80 per cent of mediation cases and 52 per cent of adjudications were closed within one-to-two months, while it says that the average processing time from the receipt of an appeal application to the determination order containing the decision issuing was 14 weeks last year.

Another issue is the likelihood of landlords getting the money back that they’re owed. While determination orders do and can rule in favour of a tenant repaying rent owed to the landlord, actually getting this money can be difficult.

In the case of the outlined letting in Dublin 4, for example, it was not that landlord’s first experience of having rent withheld. A previous tenant, on the same property, racked up rent arrears of some €55,000, and while the RTB also ruled in favour of the landlord, it required the tenant to repay the money owed at a rate of just €50 a month. So far the landlord has received just €150 of this.

“I don’t know anyone – even those who have received an order [from the RTB] – who has received a penny back,” McCann says, adding that “tenants just disappear into the sunset”.

For McCann, the time has come to name and shame bad tenants. He has already created a database – a sort of “Cartell for rents” – accessible only by landlords, detailing tenant experiences on it. It ran into difficulties on GDPR grounds in its early days, but having sought legal advice, McCann now hopes to get it off the ground by inserting a clause into a lease agreement which would require tenants to agree that this information could be held on them.