Lesssons from the Californian drought: nature has adjusted, humans not so much

Despite living in a predominantly wet environment, we are mindful of the water we use 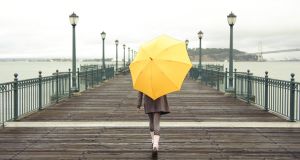 Something is undeniably up with the weather. California is receiving the equivalent of its total annual rainfall this May alone. Photograph: iStock

A week or two ago I walked through San Francisco in a high wind and heavy rain. It was not what I’d expected. Having packed T-shirts, linen and shorts I borrowed a flimsy hotel umbrella which soon got pulled inside out. Meanwhile, at home in Wicklow the sun was baking the hills.

Something is undeniably up with the weather. California is receiving the equivalent of its total annual rainfall this May alone and that early hint of Irish summer inevitably triggers rural anxiety about a rerun of last year’s drought.

It’s hard to accept there are still climate change deniers out there. Although I suppose a modicum of comfort can be derived from the fact that when sea levels inevitable rise those with their heads in the sand will be the first to drown.

It is likely that our future planet will have even more of its surface covered by oceans but it is fresh water and its availability that are going to become a primal concern.

In various American hotel rooms, overwhelmed by the babbling multiplicity of TV channels, I found refuge watching the serene turn of the earth via Nasa’s continuous feed from the international space station. I remember a young, floating astronaut broadcasting to high school students about her inability to see national borders from space.

When she observed weather patterns from orbit she thought of planet before country. Of course her vantage point was macroscopic and mine has been microscopic but even in the unfamiliar environments of California I felt interconnected with home.

The rich abundant greenery was mostly indigenous to the area but still from recognisable species: I saw Mexican Elderberry, California Poppy, White Sage and a handful of local varieties of Oak. This native flora had sharper colours and warmer aromas than the variants I’m used to but the common distinguishing feature was their evolved response to a minimal supply of water.

Local trees and shrubs may well have adapted to the dry climate but the human inhabitants have yet to fully follow suit. The sidewalk grass verges are dotted with buried sprinklers; well kept, copiously watered lawns abound and I couldn’t help but notice that toilets throughout California are fitted with flushes of Niagarous generosity.

This water isn’t local – snow melt from Lake Tahoe is piped in from the east and from the Hoover Dam on the Colorado River; or it flows 400 miles from the Sierra Nevada via the Los Angeles aqueduct.

This astounding civil engineering on a continental scale was rightly admired a century ago when it opened but thinking is shifting in more ergonomic and ecological directions. People are being encouraged to switch from European-style lawns which need watering thrice weekly to native Californian grasses where twice monthly is sufficient.

In the Napa valley, vineyards experiments are being made with “dry” irrigation. The vintners not only withhold water to encourage deeper root growth – which concentrates flavour in the grapes – they also plant cover crops to keep the soil moist. Yellow mustard is commonly used because it also protects the vines from pests.

I feel a horticultural kinship here – in the vegetable garden I always surround the carrots with shallots to deter carrot fly. My Californian comparisons end there. Our water travels no distance at all – the well is 10yards from the house – and for most of the year rainfall trickles harmoniously down the hill in the stream across the road. It is a pleasing sound which acts subconsciously as an aural hydrometer. After heavy showers it gushes and gurgles but for most of last year’s dry summer it was silent.

The water table on our hill dropped substantially and wells began to run dry. This deeply affected local farmers with thirsty cattle. Water had to be brought in by tanker. Grass growth was also slower – people had to make inroads into feed stored for winter which inevitably led to later problems in the colder months. Our agriculture exists in a finely calibrated comfort zone as far as climate is concerned: too many aberrations have magnified knock-on effects.

For our part, despite living in a predominantly wet environment, we are mindful of the water we use. We are not on the mains and have our own well, filtration system and septic tank – having to deal with occasional hiccups certainly concentrates the mind on being less flaithiúlacht with water.

If drought returns I won’t hose the vegetables unless really necessary. Besides, though some evaporates, much seeps down and hopefully replenishes the well. Our local water cycle is a small one and not on the Californian scale.

Whilst there I refused to let wet weather deter me from enjoying the warmer climate. One evening I combined some local recreation with weather more reminiscent of home by sitting in the hotel’s outdoor hot tub in a light drizzle.