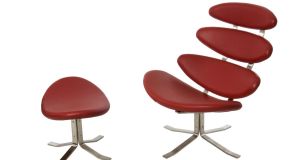 Danish modern – the furniture design that married traditional materials with emerging technologies and influenced by studies in anthropomorphism – had a powerful influence on international design in the first half of the 20th century but was on the wane when Poul Volther (1923-2001) designed the Corona lounge chair.

Working in a co-operative, under the great Børge Mogensen, where he designed several pieces of functional wooden furniture, Volther was tasked in 1964 with designing a chair using foam rubber. It was originally made with a complicated timber frame, requiring the skill of craftsmen, but Volther redesigned it a year later using a metal frame that was cheaper to produce and more elegant.

His Corona chair is a study in minimalism: it uses the least material possible – just 2 metres – to cover the series of oval cushions that make the seat and back. To reflect its anthropomorphic shape, it should really be called – with utilitarian seriousness – the Spine, but instead it got its name from the crown of light that appeared – or so design lore has it – with the eclipse on the day Volther finished the design.