Greenery, gastropubs and gridlock: Make a Move to Castleknock

A comfortable northside suburb with everything a person could want, and a price tag to match 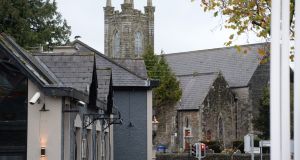 It’s probably a testament to Castleknock’s appeal that estate agents keep moving the parameters of the district toward the edges of Clonee, Clonsilla and Blanchardstown. “It amuses me sometimes to read in the property pages that there is a house for sale in Castleknock only to discover that it is situated in Ongar; obviously the tag adds value!” notes resident Séamus McCabe.

Castleknock village proper, which starts at the Phoenix Park gates and ends at Laurel Lodge bridge, is the definition of a settled, leafy, comfortable suburb; likely down to ongoing efforts of an active Tidy Towns committee.

The Phoenix Park aside, other bonuses to the area include proximity to the M50 and Dublin Airport, decent transport links, Sommerton Farm on the Porterstown Road and plenty of village activity.

“We have a full selection of good shops, restaurants, cafes, dentists, doctors, shoemakers, solicitors, auctioneers and the famous Myos pub where all the news and gossip gain legs,” says McCabe.

And finally, Castleknock has its own supermarket at Lidl, meaning locals don’t need to trek to Blanchardstown for their big shop. Still, some long-standing residents say Castleknock’s unique village texture has been affected adversely by the supermarket, its car park and auxiliary shops.

“The main downside of living in Castleknock village is the constant through traffic, as commuters head out of Dublin via Castleknock to their homes in the greater Dublin area,” explains artist Clare Brophy. “It is never ending.”

Resident Simon Murtagh agrees: “Castleknock lacks a social centre and a recently opened Lidl in the heart of the village has caused a traffic nightmare for residents. A few more imaginative business ideas to attract people to the village wouldn’t go amiss.”

This charming five-bedroom detached house at 11A Park Villas on Peck’s Lane is an amble to Castleknock village and the Phoenix Park and is modern and airy (€795,000, via DNG Castleknock).

First-time buyers will find good bargains in Laurel Lodge and this three-bedroom semi-detached house at 10 Castleknock Brook (€345,000, via Baxter Real Estate) makes an ideal starter home for a family.

This two-bedroom house at O’Casey Hall in Collegewood means you’ll be in the middle of the action right in the village (€260,000, via DFM).

If you really feel like splashing out, this five-bedroom showstopper at 9 Homeleigh near Porterstown is away from the village but ready to walk into (€1.4 million, via Sherry Fitzgerald).

Five-bedroom houses in Bracken Park were snapped up recently for €3,000 a month. Expect to pay in the region of €3,000-€4,000 for a four- or five-bedroom house in the heart of Castleknock.

Myos (Castleknock Road) is arguably the best-known pub in the village and though it’s a long-standing institution, it’s not the only show in town. Kavanagh’s (Laurel Lodge Shopping Centre), Brady’s (Old Navan Road) and the Carpenter (Carpenterstown Road) are all lively spots on the weekends, while the Roselawn Inn (Roselawn Road) or the Strawberry Hall in the Strawberry Beds are better choices for a quieter night. De Bruns (Main Street), Okra Green Pakistani restaurant (Village Shopping Centre) and Wong’s (Ashleigh Centre) are safe bets for dining in the village, while locals also mention the 12th Lock (Royal Canal), closer to the Laurel Lodge end.

The village itself is a mecca for families, and people who grew up there, with many empty nesters still enjoying all that the area has to offer. Younger families tend to live in the more affordable spots like Carpenterstown or developments near the former racecourse. A total of 37 per cent of Castleknock residents are couples with children, while 27 per cent are couples without children and 37 per cent of residents are aged between 16 and 34, while 22 per cent are aged between 50 and 64.

Leisure activities and green spaces are in abundance, according to Clare Brophy.

“The park has the heritage centre with its visitor centre and a good restaurant,” she says. “The canal has a wonderful quiet walk along its banks. Nearby is the yoga hub and National Aquatic Centre, all providing leisure activities in the area. There are several great schools both primary and second level and the majority of children are within walking distance of their local school.”

The 37 and 38 Dublin buses serve the area (and, to some extent, the 39 also), while Arrow stations at Castleknock, Navan Road Parkway and Clonsilla get residents into town into about 20-25 minutes. Otherwise, it’s an hour’s walk from the city centre or a comfortable 30-minute cycle.

“Castleknock is a great place to live for a number of reasons. There is a thriving community centre at Laurel Lodge, which provides a huge variety of classes and activities for young and old. Although cycling through the village is dangerous due to narrow roads and frankly, dangerous and inconsiderate drivers. The Royal Canal greenway, although incomplete, is an important local amenity for walkers and cyclists. Many of the latter use it for their daily commute.

“I have most things I need at close hand. I thrive on the social, leisure and retail opportunities that my area provides. I particularly appreciate the good transport links and ease of access to the west and south of Ireland as well as the city centre. While the M50 and the hum of traffic can feel too close at times, the many green spaces, parks and Greenway, help to counteract this.” – Mary Gillan.

Homemade ice-cream: no gadgets, no problem
9

Irishwoman in New York: I didn’t fear getting Covid-19 but I should have
10