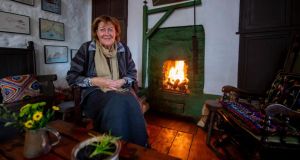 Maria Symonds-Gooding: a green-painted wooden crane for pots and kettles to be heated over an open fire came from the house of Peig Sayers.

There is an important piece of social history in a stone cottage near Dunquin in west Kerry; a cottage that appears modest in size on first entering, but which opens out like an enormous charmed concertina at the back.

This is artist Maria Simonds-Gooding’s home, and the piece of social history is a green-painted wooden crane over the fire; burning a deep red in the autumn day. Traditionally, a crane held pots and kettles to be heated over an open fire.

“This came from Peig Sayers’s house,” Simonds-Gooding explains. Peig’s late son, a friend of many years, gave it to her.

On the drive out west to her cottage, you can see the Great Blasket rising dramatically from the ocean, and anyone interested in Irish culture will be glad to know Peig’s fireplace crane remains within sight of where it was located for so long.

Simonds-Gooding, a member of Aosdána, was born in Quetta, before partition, when it was in India. (Quetta is now a western city in Pakistan. )

“I spent seven very important years in India,” she says. Those years, of heat and colour and noise, had a profound effect on her sensibility. She was also permitted considerable liberty.

“I was always running away,” she announces. Aged three, she was once found a mile from home. “It was a time when parents never really wanted to see or hear their children. That’s why I am such an independent person, and why I love remote places and feel at home there.”

The family returned to Ireland when she was seven, but she did not attend school until she was 12. She was a pupil at the Holy Child convent in Killiney, south Dublin, for four years, where Maeve Binchy was also a pupil, two years above her.

“I hated school,” she says. “Bells ringing, everything controlled. I remember thinking if I was in Mountjoy Prison, that would be better, because at least I wouldn’t have exams there.”

She is hazy about when she learned to read and write, but agrees it was much later than someone who had been traditionally schooled. “Could I have been 10? 12?” she asks rhetorically.

Instead, as a child, she was “always drawing”, and running wild and unsupervised around the 12 acres at the Kerry farmhouse the family bought and renovated. “I didn’t want any toys. I just wanted to look at the landscape.”

Simonds-Gooding is absent-mindedly eating honey as we talk in the front room of the cottage; a beautiful, atmospheric space full of artwork, artefacts from her many travels, and other items from the Great Blasket; a place that has had meaning for the artist most of her adult life.

“I remember the date exactly,” she says. “It was Sunday, June 16th, 1963.” (Later, I check: the day was indeed a Sunday.) She was offered “a spin over to Dingle” with a friend, and so Simonds-Gooding, her accordion and dachshund dog Sebastian all landed in Kruger’s Bar for the first time. The landscape on the drive in thrilled her, and then the community of musicians she discovered in Kruger’s. “I was just totally enchanted. I knew I was in the right place.”

She returned again and again to the area. In the hot summer of 1968, she hopped on a boat with divers she met in Kruger’s and got them to land her on Inishvickillane. When the divers left, she stayed on alone for three weeks, in a “tiny tent that let the dew in.” This was prior to the island’s purchase by the late Charlie Haughey.

What did she eat? “I snared rabbits. I knew how to do it humanely,” she says, matter-of-factly. So she snared, skinned, disembowelled, cooked and ate the rabbits? “I ate limpets and periwinkles and rabbits,” she agrees, surprised that apparently these hunter-gatherer skills aren’t commonplace to all.

When she went back on land again, she heard of a cottage going for auction: the one we are currently in.

“It had belonged to a Blasket Islander, who had come off the island, and was now wanting to move to a council house in Dingle, ” she says. “He bought it in 1948 for £26. I bought it 20 years later for £810.” Along with the house, she inherited a settle bed from the islander who sold it to her, which still stands in the front room. On the wall opposite us is the wooden wheel from a spinning wheel. “That was the last spinning wheel on the Blasket, and it was about to be burned for firewood. I bought it for £1.”

The original cottage has been extended back, to include an impressive modern studio, which includes an etching press. Her work is on the walls throughout, reflecting the Kerry landscape that has been her subject for decades: seals, sheep, cottages, curraghs and a dolphin.

“When I first came to live here in 1968, people thought it was a strange thing to live where there were no artists, but I found all my inspiration from the way people sheared their sheep and built their stone walls. That way of life is dying out to some extent, but it has totally enriched my life and my way of work.” There is an additional lovely gallery space, adjoining the studio, which the public can access via a separate entrance.

As we pass through the house, various birds hop around outside, flying and following us from room, often coming up close to the glass. They look as if they are waiting for her to come out, as indeed proves to be the case.

“Ah, those are my blackbirds and robin,” she says, waving out at them. “They’re my buddies. The birds come every day to be fed.”

Simonds-Gooding turned 80 last month, and celebrated it with a party in nearby Kruger’s; the place she first landed into more than half a century ago.

The party was organised for by local friends. “I think people think that if you’re 80, you’re on the last stretch, so they go out of their way to mark the birthday,” she jokes.

She brought her accordion to the party; the spirit of the 23-year-old clearly still endures.