Vintage Irish tourism poster under the hammer in New York 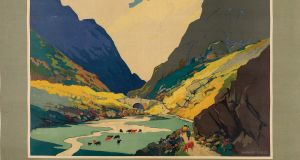 Rare vintage travel posters designed to entice overseas visitors with the beauties of the British Isles and Ireland in the early 20th century are expected to make thousands of dollars at Swann Auction Galleries in New York on November 14th.

Dating back to 1914, the designs celebrate a wide range of attractions, from Trooping the Colour in London to Shakespeare’s Stratford-upon-Avon. A number of designs in the auction were aimed at American audiences and were designed by successful artists of the day. Ireland is represented by a poster of the Great Western Railway/Southern Ireland, 1928, by the illustrator Warwick Goble which is estimated to fetch $1,000 to $1,500 (approx €903 - €1,354).

Gyrth Russell, a Canadian who worked as an official war artist in the first World War under the leadership of Lord Beaverbrook, specialised in designing railway posters between the wars. His Great Western Railway/Stratford-upon-Avon, from the 1930s, is also estimated at $1,000 to $1,500.

Best known among the artists is Terence Cuneo, the British artist who was appointed as the official artists for the coronation of Queen Elizabeth II, but who is celebrated for his dynamic travel posters featuring railways, boats and other engineering feats. Clear Road Ahead/British Railways, 1949, is a fine example of the genre and is estimated at $1,500-2,000 (approx €1,354 - €1,806).