A Chelsea winner's guide to creating a tranquil garden 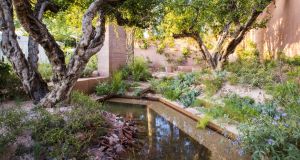 Subtle, thoughtful and planet-friendly, there is a delicacy and intelligence to the work of the British garden designer Sarah Price – one of the key speakers at next week’s Garden Landscape Designers Association (GLDA) seminar in Dublin – that few can match. Best known for her work on London’s 2012 Olympic Park gardens, her show gardens at Chelsea have also won her a legion of fans along with a slew of medals.

The most recent was gold for her large show garden at the RHS Chelsea Flower Show 2018. Inspired by Claude Monet’s paintings of his water garden at Giverny, Price’s design featured multi-stemmed pomengranate trees and tall, umber-coloured walls, architectural archways, shallow steps and raised beds constructed from rammed earth and aggregate.

Throughout it floated gentle drifts of meadow-inspired, Mediterranean-style gravel planting, including sprinkles of European wildflowers such as poppies, woad, crimson clover, candy carrot, asphodel and false fennel which wrapped themselves around a shady, reflective pool fed by a trickling rill.

An ethereal, almost otherworldly garden, it showcased Price’s ability to create uniquely atmospheric, tranquil yet theatrical spaces. It also highlighted her masterful use of composition, colour, form and texture, skills first honed as a student at Nottingham Trent University, from where she graduated with a first in fine art before turning to the world of horticulture in her 20s.

Plants are at the very heart of every garden that Price designs, her building blocks, the paint with which she works her canvas. She is fascinated by the ways in which different species are natural bedfellows, intrigued by how they form sustainable, convivial communities in the wild where the all-important, enduring bond is their shared preference for a certain set of growing conditions, whether cool, moist, shady woodland or sunbaked, free-draining gravel.

For the same reason, she’s deeply attuned to the sharp sense of discord apparent when they’re given the sorts of growing conditions that simply don’t suit them. “It’s like a sudden jarring note in a piece of music.”

As a garden designer, their ability to radically transform the bleakest, most unpromising of sites also delights and inspires her. She cites, by way of example, the garden she’s creating in Southampton for Maggie’s, the British charity that offers free cancer support.

Inspired by the ecology of nearby New Forest with its damp valleys, boglands, open heath and shady forests, as well as the need to create a reflective, secluded space which patients and their families can use as a natural sanctuary from the outside world, it will feature a stylised mini-woodland filled with Scots pine and birch trees that gently gives way to a sunny, open space populated by glimmering swathes of molinia grasses and drifts of shrubby heathland.

“It’s really exciting to be creating something special on what was, to be honest, such a bleak, inhospitable site.”

Another project is Horatio’s Garden Cardiff, one of a series of therapeutic gardens attached to spinal injury clinics throughout the UK commissioned by the national charity Horatio’s Garden.

“It presented many new design challenges for me, not least of which was creating a garden for wheelchair users where even the slightest bump in a path can cause excruciating pain. Traditionally these patients have very little or no access to the outdoors while they’re receiving lengthy hospital treatment. Many speak of their longing to simply look up at the sky. Being outside in a garden, reconnecting with nature, is so important to them and their families.”

Price’s own family garden is a 1½-acre plot in Abergavenny in rural Wales, on the edges of Brecon Beacons National Park, where she lives with her husband and their two young children. The property originally belonged to her grandparents, so it’s a garden with which she’s been deeply familiar since childhood.

Was it a challenge to put her own mark on the space, given its deep personal significance?

“Initially. But luckily my grandmother was an amazing gardener with a planting style akin to Beth Chatto so I inherited many beautiful plants. That aside, as a designer, it’s always been important to me to tread lightly, to take time to observe and consider. Especially with mature gardens, which take a lot longer to bring back…you’re carefully editing, slowly, slowly carving them out of decades of overgrowth, dealing with the challenges of too much shade, over-mature trees and shrubs, weeds – so many weeds – and occasional disease. So it’s inevitably a gradual process, but one that I’m enjoying.”

Blessed with a free-draining soil, a benign microclimate and the shelter of sunny walls, she’s now experimenting with a palette of plants that includes many heat-loving Mediterranean species.

Another horticultural experiment bearing fruit is her use of what she describes as “mineral mulches” – examples include sand, gravel, shale, aggregate- to suppress weed growth and avoid soft, overly lush growth. “It’s really interesting to observe how the plants react.”

Asked to name the gardens that have most inspired her, Price singles out Rousham in Oxfordshire. Designed in the grand gothic style by the great 18th-century British landscape architect William Kent, it is a place of shady woodlands, cascades and formal pools, temples, follies, grottoes and classical statuary.

“Like a child exploring, you feel yourself being propelled forward; there is this sense of constant movement through space and time, through light and shade . . . it’s exhilarating.” Another is Great Dixter in East Sussex, which she loves for the fact that it is gardened “with such energy and by taking risks, using unusual plants that are beautifully combined”.

Garden writers and designers that inspire her include the 20th -century British landscape architect and author Sylvia Crowe, whose keen sensitivity to the character of the wider, wilder landscape deeply informed her work throughout her long career, just as it does Price today. “She was an incredible designer and writer; her book Garden Design is an underappreciated classic.”

Contemporary figures include Nigel Dunnett and James Hitchmough, both of whose work as innovative designers and authors as well as professors at Sheffield University is defined by their deep interest in designing nature-inspired, ecology-based, sustainable gardens and landscapes that address the many complex challenges of climate change.

Some argue that it is unrealistic to talk of creating naturalistic planting in your average small, suburban back garden. Does she agree?

“No, not at all. In fact there are so many possibilities. Simple but effective techniques such as blurring/ disappearing the garden boundaries, cloud pruning, lifting the leafy canopy of established trees and shrubs, letting sections of the lawn grow longer and spot-planting meadow-style perennials throughout it or mass-planting certain species of trees or tall grasses such as Stipa gigantea and molinia closely together to create a sense of a mini-woodland . . .

“There are so many ways to create a very beautiful, atmospheric slice of nature in the smallest of spaces. It’s really all about looking at it with a fresh eye.”

Sarah Price is one of the key speakers at next week’s GLDA seminar, Seeds of Change: Planting Design for the 21st Century, GLDA 2020, which takes place on Saturday, February 29th, Crowne Plaza Hotel, Santry, Dublin 9. Other guest speakers include Nigel Dunnett, Cassian Schmidt and Sandro Cafolla. Tickets from €95 for GLDA members, €120 for non-members. See glda.ie or call 085 8760203 for details.

Young seedlings and tender plants growing in polyunnels/ glasshouses need very careful protection from cold temperatures. Offer protection by gently covering them in the evening with 1-2 layers of horticultural fleece. If temperatures are forecast to plunge to below freezing, consider providing temporary heat. Conversely, on very bright, still days, temperatures can rapidly rise in unventilated glasshouses and polytunnels and damage plants, so make sure to lift fleece away each morning (hang it somewhere to dry if it’s damp) and gently ventilate if necessary by slightly opening doors or vents, making sure to close them again in the evening.

Encouraging a love of gardening in young children is a gift that keeps on giving. Dutch illustrator and keen gardener Noelle Smit’s beautiful picture book In the Garden does exactly that, charting the turning of the growing year on an allotment through a series of delightful llustrations and accessible text. From the joys of seed-sowing in spring to harvesting apples and pumpkins in autumn, it conveys the magic of gardening to a young generation with charm and flair. Originally published in the Netherlands, the English translation has just been published by Little Island (€20, littleisland.ie )

Dates For Your Diary:

Propagation and How to Get the Most out of Your Plants, a talk by Michael Wachter, senior gardener and chief propagator at Great Dixter, on behalf of Foxrock & District Garden Club.