Owners bought Broadlands as a new-build in 2017 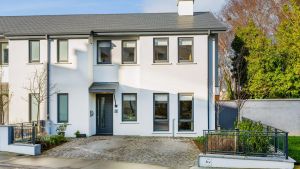 A house in a new homes development launched just over two years ago across the road from Killiney Golf Club is the first in the scheme to come back on the market.

The price reflects the market in the area, says Sherry FitzGerald agent Ciara Brassington; the house is substantially the same as it was in 2017, although the owners have put a good-sized garden room, used as an office, in the landscaped rear garden.

The two-storey semi-detached house is located towards the back of the development, next to a gate into Cluny Park, a large green space with a tennis court at its centre. The owners made a few adjustments to the house, but were happy with the contemporary fit-out, built by developer Michael O’Flynn on the site of Pamela Scott retailer Sean Barron’s former home. And like most new builds, it has a very efficient A2 Ber with an air-to-water heat pump and underfloor heating downstairs.

The high-spec finish is most evident in the large L-shaped open-plan kitchen/dining/living room at the rear, where the owners had the island removed to create space for more storage. Soft-close kitchen units are grey and white, the countertop is pale Silestone.

The décor is simple, with white walls and smart contemporary furniture. Floor-to-ceiling glass doors open on to the landscaped patio which is divided between an Astroturf space with a large trampoline and a landscaped seating area next to the smart timber garden room.

The hall – off which is a good-sized utility room and downstairs toilet – and living room at the front have hardwood floors. The living room has recessed ceiling strip lighting, a stone fireplace and inset, a wood-burning stove.

The four bedrooms upstairs are all doubles, two of them en suite – and the main bedroom has underfloor heating in its en suite. The bedrooms, like the rooms downstairs, are painted white, and all have fitted wardrobes. One of the two smaller doubles is dual aspect, with a corner window looking through trees over Cluny Park. The en suites, like the family bathroom, are fully-tiled.

There’s access, with space for bike storage, at the side of the house and two car-parking spaces at the front. Broadlands is close to the Graduate pub roundabout at the top of Avondale and Ballinclea Roads, and a short distance beyond the Ballinclea Road entrance to St Joseph of Cluny secondary school.