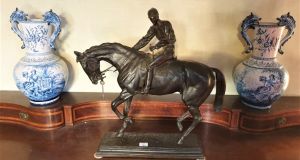 The contents of a Co Kildare farmhouse will feature in an auction by Sean Eacrett on February 18th at Fallon’s Restaurant in Kilcullen.

New Park House on 180 acres in Ballysax has been home to the Phelan family since 1919. Arthur, now aged 90, and his sister Detta, 87, sold the property last October for €3.2 million. Now some 100 lots from the house are to be auctioned, including a first edition of The Life and Adventures of Nicholas Nickleby by Charles Dickens.

Dating from 1839, the book, which was the first of Dickens’s romances, was an immediate success, establishing his reputation as the greatest English novelist of the Victorian era.

On June 9th this year, Dickens devotees will gather at Westminster Abbey to mark the 150th anniversary of the author’s death at the simple stone that marks his final resting place. News this week reported in The Times that, while Poet’s Corner in Westminster Abbey is the writer’s final resting place, it was not Dickens’s wish to be buried there. He requested to be interred near his home in Gads Hill in Kent. It is suggested that public opinion, fuelled by The Times, plotted against the writer and his family’s wishes, dictating that Westminster Abbey was a more appropriate site for such an illustrious author.

The book is listed with an estimate of €150-€250 as the binding is slightly frayed.

Living beside The Curragh, it is hardly surprising that there is an equine theme to some of the artworks from New Park House. Arthur, while known locally as “the dentist”, was also known for buying the racehorse Arctic Melody.

As he was growing up in New Park, local trainer Paddy Prendergast tried to persuade him to buy a horse. Eventually Arthur’s arm was twisted and he bought Arctic Melody, who went on to win at Naas, The Curragh and York before retiring to stud.

A large bronze of a horse and rider, by Isidore Jules Bonheur, known as one of the 19th century’s most distinguished French animal sculptors is listed at €2,000- €3,000.

In addition, and proof that country house auctions can throw up all types of interesting items, is a sculpture of Adam Clayton by Joseph Sloan, which is listed with an estimate of €1,000.

Self-taught Co Down-born Sloan now divides his time between France and Ireland, and his work is held in many public and private collections. Having originally worked in theatre, he met Liverpool sculptor Brian Burgess, who gave him a studio space and materials, telling him to “get on with it”.

Sloan never looked back, and in 1992 he created the O.N.E. Air Corps Memorial at Baldonnel; the prominent edifice to the memory of the deceased personnel who have served with the Air Corps, which was unveiled by then-president Mary Robinson.
seaneacrettantiques.ie