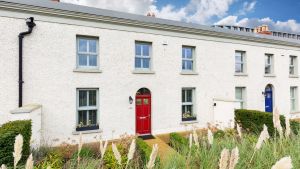 Llandaff Terrace sits back from the Merrion Road behind a linear communal garden and in front of the sprawling Elm Park development of offices and apartments. Number 219 is one of eight homes on the terrace and comes with cracking sea views from its first floor.

The property was purchased in 2016 by US investor Starwood Capital Group as part of Elm Park’s vast office and residential development. The terraced houses, which had been renovated, were refreshed using the services of House & Garden Furnishings and brought to market in November 2018 when the two-bedroom units were asking from €665,000 and the three-bedroom houses from €790,000.

Now the double-fronted house is back on the market asking €765,000, through Hunters estate agents, an increase of 3 per cent.

The entrance hall leads to a living room on the right, where the gas-fired insert is book-ended by two floor-to-ceiling glass panels that look into the family room to the rear.

On the other side of the hall is its breakfast room, with the relatively small kitchen set at a level below and the family room, painted an on-trend classic blue, a few steps below that again. All the rooms have rich coloured shades on their walls that help to create a cocooning effect, further enhanced by the plantation-style shutters on all windows to the front. The impressive double glazing by Rationale really dials down the constant hum of traffic on the busy Merrion Road.

Upstairs the bedrooms are set over three levels. The master is to the rear and has a gorgeous little balcony off it where you can enjoy the lush landscaping of the office and apartment blocks to the rear. The property’s family bathroom is on the other side of a divided set of steps. There are two good doubles to the front on the first floor, one with stellar sea views and the final bedroom or study is at the top of the house.

The bed here is set atop a platform, something that children will love but if you were to install a standard single bed on the existing floor space there would be little room left for anything else so this should really be considered a home office.

The property comes with off-street parking and a southwest facing garden that is bordered by a high wall of more than 3m. Once building works are completed on the Tara Towers hotel site you will lose some of the southern light but the garden remains very private.

My tenant is subletting without my agreement. What can I do?