More houses are being built, but not enough, while prices and rents are climbing too fast 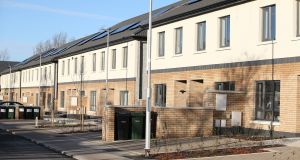 “The Housing Fix” is an Irish Times series exploring solutions to Ireland’s housing crisis – arguably the biggest social and economic issue facing the country and its next government – in the run-up to the general election.

These five charts illustrate the scale and nature of the crisis.

House prices and rents, vs income: Since 2012, house and apartment prices in Dublin have risen by 90 per cent and 80 per cent respectively (a little less in the country at large), while wages have increased by only 18 per cent. Rents have risen sharply also. If you own a house you are laughing; if not, you are locked out.

Too few new builds: We are building more houses than at any time in the past decade. The ESB grid connections, which show new homes signing on to the electricity grid, demonstrate an 81.1 per cent increase in apartments completed in the third quarter of 2019 compared with the same quarter in 2018, rising from 598 to 1,083. There are also 20,000 new commencements in the first nine months of 2019, up 22 per cent on an annual basis. But it’s still far below the estimated 30,000 units needed annually to keep up with population dynamics.

Our wealth is tied up in housing: Based on Central Bank figures, net household wealth in Ireland rose to €780 billion in the second quarter of 2019, equating to €158,574 per capita. Residential housing wealth amounts to €537 billion worth of this. Homeowners will move to protect their wealth. They obstruct development and hoard development land which means that as housing demand goes up in cities, supply doesn’t go up in response; prices rise instead.

Dearth of cheap accommodation: A healthy rental market offers a range of options – in terms of quality, location and price. Goodbody research shows a narrow gap between the most expensive and the cheapest rentals in Dublin. Here rents at the top end are about 1.8 times those at the lower end, compared with 2.5-3.5 times in most other major markets. This means lower-priced apartments here are proportionally more expensive than in other markets, and there is little by way of cheaper, or starter, rental supply. This has led many to have to rent a bed with others in an apartment or house, rather than having an apartment of their own – the so-called “crammers.”

Shame-free sex education: It’s So Amazing! And only a little bit mortifying
5

‘I’d like to start my own business in Ireland, but not by the back door’
6

Authentic and walk-in ready in Kilmainham for €625k
7