Itching to get going in the kitchen garden or allotment? Here’s a handful of crops to start growing now 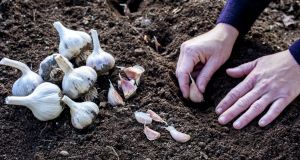 Jobs to do in the garden

Tomatoes: If you can lavish these hungry, thirsty, heat-loving plants with plenty of attention throughout the growing season, then they’ll reward you with oodles of deliciously juicy, flavour-filled fruits that are utterly unlike their bland supermarket equivalents. While they can be grown successfully outdoors in Ireland if given a very bright and sheltered spot and a long, hot summer, for reliably productive, healthy tomato plants you’ll need to grow your tomatoes under cover of a glasshouse, polytunnel, conservatory or sunny porch.

Tomato varieties fall into one of two broad categories; the first, known as determinate or bush, are typically more compact, don’t require staking or pruning, are faster-cropping but shorter-lived and perfect for growing in pots or hanging baskets; examples include the enduringly popular ‘Tumbler’ and the high-yielding, ultra-tasty, early-cropping, dwarf trailing variety  ‘Maskotka’.

The second, known as indeterminate, vine or cordon, require careful staking, training/ side-shooting, and are typically slower to crop but more productive over a longer period. Examples include the early-ripening, disease-resistant, delicious, prolific cherry varieties known as ‘Sungella’ and ‘Sakura’ and the early-ripening heritage salad variety, ‘Alicante’.

By growing your own tomato plants from seed (this is an excellent time to do so), you can choose from a huge range of interesting varieties. Recommended Irish seed suppliers include brownenvelopeseeds.com, irishseedsavers.ie, greenvegetableseeds.com ,seedaholic.com and most good Irish garden centres. Sow seed under cover in a warm room or using a heated propagator (set to 21 degreees), pricking the young seedlings out into small individual pots once they’ve properly developed their first set of true leaves. Place these in the brightest spot you can find, well out of the way of cold draughts and warm enough (18C) that plants don’t suffer a check to growth.

Once they’re 15-20cm tall, pot on again into their final containers. If you’re going to grow your tomatoes in an unheated glasshouse/polytunnel, wait until late spring (late April/or late May in cold areas of the country) before hardening off and planting them into their final positions, making sure to protect them with horticultural fleece until night-time temperatures rise above 10 degrees.

Potatoes: Few homegrown crops are more rewarding than potatoes just as long as you manage to dodge the threat of blight. Up until a few years ago the only truly blight-resistant varieties readily available to Irish gardeners were from the Sarpo family but in recent years a host of delicious, disease-resistant new varieties have been introduced including ‘Connect’ (maincrop, highly productive),’Carolus’ (maincrop, floury), ‘Alouette’ (second early, salad/all-rounder), ‘Vitabella’ (early, firm-fleshed) and ‘Sevilla’ (maincrop, very floury). These new varieties are still hard to find in garden centres but recommended online Irish stockists include Fruithill Farm (fruithillfarm.com) and Quickcrop (quickcrop.ie) .

By growing early varieties- even those with only average blight-resistance such as the scrumptious  ‘Charlotte’ (second-early, waxy) – you can also reduce the risk of blight, which typically only hits from July onwards (although it can strike as early as May in the mildest parts of the country). But bear in mind that many traditional maincrop varieties such as ‘Pink Fir Apple’ (maincrop, waxy) and ‘Kerr’s Pink’ (maincrop, floury), although prized for their tastiness, are very prone to this damaging fungal disease.

Maincrop varieties are typically planted in April-May and take 18-20 weeks to harvest time while early varieties of potato are typically planted outdoors in mid-March (or into a polytunnel in February) and are much faster to crop, being ready to harvest in 14-16 weeks. By chitting/ pre-sprouting the tubers indoors this month in a cool, bright room, you can also encourage them into early growth, and help them to avoid the threat of blight. All potatoes need a rich, well-drained soil enriched with plenty of well-rotted organic matter/homemade garden compost in a sheltered spot in full sun. They will also grow very well in large pots, containers, sacks when space is limited.

Chillies: These South/Central American plants require a long growing season, plenty of heat and bright sunlight to do well, making them unsuitable for growing outdoors in Ireland. But they’ll happily grow indoors on a sunny window-sill or in a bright conservatory, typically producing their decorative, fiery-flavoured fruits from July onwards. They can also be grown in a bright, frost-free polytunnel or sunny glasshouse but do take similar precautions to tomato plants in terms of protecting them from cool temperatures/draughts.

While it’s possible to buy young chilli plants from garden centres in late spring, it’s a great idea to grow them from seed for the far greater range of suitable varieties available. Recommended varieties include the very productive, mild-flavoured ‘Goat-Horn Pepper’ and ‘Hungarian Hot Wax’ (brownenvelopeseeds.com), the medium-hot, perennial ’Bolivian Hairy Chilli’ (irishseedsavers.ie) and the very hot, productive, early-cropping ‘Ring of Fire (seedaholic.com and greenvegetableseeds.com). Late January/ February is the very best time to sow the seed, which is famously slow to germinate (2-6 weeks). For best results, sow under cover into a good-quality, damp compost, use a heated propagator (27-32 degrees is ideal) and don’t let the compost dry out. Once seedlings appear, quickly move them to a bright, draught-free, slightly cooler spot (16-21 degrees) and gently bottom-water as required but avoid overwatering.

Once the first set of true leaves appear, pot seedlings on into small individual pots and feed every 10-14 days with a good quality liquid tomato feed, potting them on again about 4-6 week later into 12-15cm pots. Pinch out the growing tips of young plants to encourage bushy, productive growth. For plentiful production of their fiery fruits, liquid-feed regularly and hand-pollinate the flowers with a cotton bud or fine paintbrush.

Strawberries: It might seem strange to suggest growing strawberries from seed but it’s a great way for gardeners to get their hands on plenty of productive, disease-free plants and allows access to a far wider range of varieties than usually offered for sale as potted plants/ runners. Sown this month, they will flower and fruit in their first growing season. For best results, surface-sow with bottom heat (16-21C) and under cover onto a damp good-quality John Innes seed compost then add a very thin layer of fine-grade vermiculite or sieved compost.

Once the seedlings have produced their first set of true leaves, prick them out into individual small pots. Keep them in a very bright, frost-free spot before planting out in May. For something different, try Strawberry ‘Mignonette’, a hugely-productive, compact variety of alpine strawberry that pumps out its small, delicious berries all summer long or the equally dainty ‘Alexandria’. Both will happily grow in a hanging basket and in shade while the delightful musk strawberry (Fragaria moschata) also grows happily in shade. For more traditional-sized berries, try the prolific ‘everbearing’ Strawberry ‘Temptation’ which fruits from July until the first frosts. Happy in a container or in the ground, give it a fertile, moist but free-draining soil in sun/ light shade.  Seed suppliers include seedaholic.com and chilternseeds.co.uk

Before planting, break the bulbs up into individual cloves, using only the plumpest, blemish-free, undamaged ones to plant in rows into weed-free, free-draining but moisture-retentive,fertile soil in full sun enriched with a little homemade garden compost and a sprinkle of wood ash, burying the cloves to twice their depth and spacing them 10-20cm apart and in rows 30cm apart. Alternatively, where space is tight, plant into pots, window boxes or wooden tubs. Stockists include Mr Middleton (mrmiddleton.com) Quickcrop (quickcrop.ie) and all good garden centres.

The recent winner of Ireland’s Tree of the Year award, Blarney Castle’s ‘Witch’s Yew’ is estimated by experts to be in the region of 600-years-old. This ancient tree is now representing Ireland in the European Tree of the Year competition, with online public voting taking place throughout February and the winner to be announced at a ceremony in Brussels on none other than St Patrick’s Day. To cast your patriotic vote, visit treeoftheyear.org

This Week in the Garden ...

In milder parts of the country where grass is already in active growth and the soil is firm underfoot, choose a dry day to give lawns a gentle haircut. But make sure to raise the blades on your lawnmower to their highest position before doing so to avoid cutting back too harshly and leaving lawns vulnerable to being singed by a sudden harsh frost. Instead the aim should be to just gently ‘top’ it.

Certain late-flowering kinds of clematis including types of Clematis viticella, Clematis texensis and large-flowered hybrids such as Clematis ‘Jackmanii’ and Clematis ‘Perle d’Azure’ belonging to what’s known as Group 3 pruning group should be pruned back hard to 30-60cm above ground level at this time of year to prevent them from making a messy, unwieldy tangle of top growth. New growth will soon appear and should be carefully trained up/against a suitable support.

Dates for your Diary ...