True blue razzle dazzlers that will stand the test of time

Sapphires abound in a Christmas sale of opulent jewellery 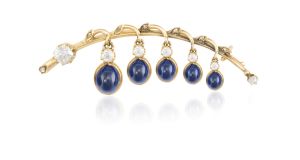 Throughout history, sapphires have been revered for their beauty, strength and durability, and their perceived powers of wellness and protection.

In medieval legend, King Solomon’s magical ring, known as the Seal of Solomon, was believed to be an inscribed sapphire, which gave him the power to command demons and seduce the Queen of Sheba.

The largest sapphire ever mined was that of the Star of Adam, discovered in Sri Lanka in 2016, weighing a colossal 1,494cts (280g). But it is the Star of India that remains one of the world’s most famous blue stones. In the early 1900s, the 563ct stone was donated by American financier JP Morgan to the American Museum of Natural History in New York, where it was the only gem to be housed in an alarmed case.

On October 29th 1964, three American surfer friends, led by Jack Murphy ‘Murf the Surf’, broke in to the museum through an empty bathroom window. On discovering the battery in the alarmed case of the Star of India was dead, they duly stole the golf ball-sized sapphire along with the Midnight Star, the DeLong Star Ruby and the Eagle Diamond.

What alerted police to the trio were the raucous parties they threw in a nearby hotel while casing out the museum for the heist. Most of the gems were located in a bus station locker two days later.

After this week’s jewel robbery in Dresden, in which an estimated €1 billion worth of baroque jewellery was stolen, German police have yet to confirm whether the 648 carat sapphire, part of the royal collection in the museum’s Green Vault, was stolen.

Adam’s of St Stephen’s Green has a great collection of sapphires and blue stones in its forthcoming jewellery sale on December 3rd. There is a pecking order when it comes to quality, which dictates the price according to Claire-Laurence Mestrallet, curator of the sale.

“Though sapphires come in most colours, generally the very best come from Kashmir – which are velvety blue, followed by Burma, Sri Lanka and Madagascar. Often they are subjected to heat treatment to improve the colour, so stones that have not been treated with heat, are considered the best as they are completely natural”.

Top of the bill in the blue stone section is a rectangular-cut sapphire and diamond pendant, with a report stating that the Sri Lankan sapphire weighs over 23 carats with no heat treatment (€25,000–€30,000).

And while the jewellery sale is underway, the salesroom will display works of art for Adam’s Important Art sale which will take place the following day on December 4th.

Here it is said the artist had absorbed the influence of Egyptian art, with flattened stylised forms and strictly limited palettes, which art critic Aidan Dunne describes as “a key moment in his artistic evolution”.

Interestingly though, Scott retained these paintings himself for many years where they hung in his studio in Bath, until he gifted them. The two paintings were then purchased by a private Irish collector who has now submitted them for sale.

Another departure is Mary Swanzy’s Crouching Figure with Bowed Head; an incredibly haunting painting, and a bit of a dichotomy, as it is laden with colour yet shrouded by darkness (€10,000-€15,000).

“She was heavily impacted by World War II, as she had travelled extensively over Europe, and understood the devastation,” explains James O’Halloran of Adam’s.