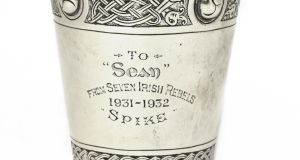 The silver beaker by William Egan and Sons of Cork

Spike Island was named Best Attraction at the International Travel and Tourism Awards 2019 in London this year, where it beat off competition from the likes of Buckingham Palace and the Colosseum. This accolade follows its Europe’s Leading Tourist Attraction at the prestigious World Travel Awards in 2017.

Yet the former prison off the shores of Cobh in Co Cork, colloquially known today as Ireland’s Alcatraz, was once thought to be the largest prison not only on the British Isles, but at one time the world – with over 2,500 prisoners incarcerated – and bore the moniker “hell on earth”.

An interesting item which will appear at UK auctioneers Sworders at its Standsted auction rooms on December 3rd, is a silver beaker by William Egan & Sons of Cork 1930, Dublin 1930-31 with the engraving “To Sean From Seven Irish Rebels, 1931-1932 SPIKE”.

The lot, which comes from a private collector in Wales, is said to refer to Seán Moylan (1888-1957) the commandant of the IRA, who subsequently became a Fianna Fáil minster for agriculture and education and Senator.

Kilmallock-born Moylan was incarcerated on Spike Island after being captured during the War of Independence in 1921, and was elected to the Dáil while in prison.

The beaker, which is dated 1931-1932, is engraved to the reverse with signatures of two former colleagues of arms: Michael O’Driscoll, lieutenant of the 3rd Cork Brigade, and Arthur Duff, a composer and conductor turned Irish Army lieutenant bandmaster also based in Cork. Other signatures are those of James Crosbie, Seamus Collins, Alexander M. Healy, D.M. O’Connor and William A. Mower.

It was made by William Egan and Sons of Cork, a firm of silversmiths intrinsically linked to the city’s troubled history as its shop was destroyed by a fire along with 40 other businesses during the burning of Cork by British forces in 1920.

Egan created some of the rarest of Irish silver, known as Republican Silver, when he created his own hallmark during the troubles in 1922, as it was impossible to send pieces to be assayed in Dublin due to rail and road closures.

Under a 1637 royal charter of Charles I, all silver had to be hallmarked at the assay office in Dublin, and only 60 to 80 pieces are known to exist with Egan’s special mark of a two-masted sailing ship and single castellated tower.

Assayed in Dublin in 1930, the base of this beaker includes a derivation of Egan’s historic mark with a two-masted sailing ship, and is said to have been gifted to Moylan on his election as a Fianna Fáil TD for North Cork.

The beaker, with two bands of Celtic knot decoration, may not be a true piece of Cork Republican Silver – in terms of 1922 hallmarking – but it certainly is in the literal sense (£2,000-£4,000) See sworder.co.uk