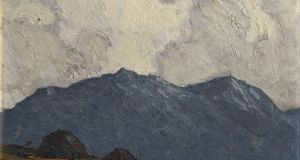 Tomorrow, August 11th, Dolan’s Art Auction, Dooagh, Achill, Co Mayo. 200 lots to include an oil by Rev Edward Nangle, the controversial minister immortalised in the book, The Preacher and the Prelate: The Achill Mission Colony and the Battle for Souls in Famine, by Patricia Byrne. Also an interesting painting of shark fishing off Achill Island by Alexander Williams RHA. See dolansart.com

I watched my dad’s funeral by webcam from France
4