If introduced today, Wilhelm Wagenfeld’s glass containers would be seen as the solution to the scourge of plastic containers 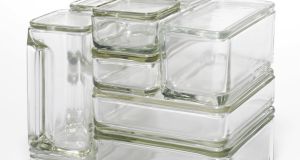 This column has already featured Wilhelm Wagenfeld’s (1900-1990) beautifully simple and elegant WG24 lamp – one of the most recognisable objects produced by the Bauhaus group. He designed that in 1924 and some time later Wagenfeld was appointed art director of a large glassware manufacturer, Vereinigte Lausitzer Glaswerke, and he brought with him the “art as industry” sensibility that was the foundation of the influential inter-war German design group.

If introduced today, his Kubus storage container system would be seen as the solution to the scourge of plastic containers. Then, he was considering the problem of storing food in the new electric refrigerators which were appearing in domestic kitchens and offered only limited storage space.

Made of pressed industrial glass, his affordable containers could be stacked, and came in different sizes and shapes for different types of food. Buyers could buy as many of the units as they needed. Each part of the modular system was easy to clean and the heat-resistant containers could be brought straight from the fridge to the table – not something you can generally say about plastic containers.