Stormy seas and a king’s crush: lots of royal interest at Whyte’s 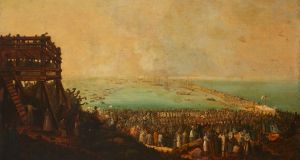 Two lots in the forthcoming Whyte’s Irish and International Art sale at the RDS on Monday, March 9th deal with the arrival and departure of two important European monarchs.

First up is The Embarkation of King George IV at Kingstown by William Sadler II on September 3rd 1821.

After leaving his dying bride and first cousin Queen Caroline (who died of laudanum poisoning with gossips alleging it was her husband) George IV, the debt-riddled monarch, embarked on an 18-day jaunt to Ireland.

Known as a spendthrift with a penchant for alcohol and voluptuous mistresses, he was said to be drunk for the entire trip which took place just three weeks after his ascension to the throne. The real reason for his voyage was said to be to visit his mistress Elizabeth, Marchioness of Conyngham, on whom he had a schoolboy-like crush.

Legend has it that the road to her home at Slane Castle was widened so he could reach her with greater haste – and that he spent four nights there. She is also purported to have spent every night with him while he stayed at the Vice Regal Lodge in Phoenix Park (now Áras an Uachtaráin) despite both of them being married.

His departure from Dún Laoghaire, which was renamed Kingstown in his honour, is captured in the painting. What is remarkable is that this predates any of the old yacht clubs that now line the seafront, and also depicts in incredible detail the social occasion that it was.

Ladies in bonnets and full length gowns stand alongside soldiers on horseback with pickpockets thrown in for good measure, showing all the pomp and ceremony of the event.

It is interesting to note that George IV’s arrival was interrupted by a storm whereupon he was blown off course to the Isle of Man, where he commandeered a steamship, which became the first of its kind to visit Irish shores.

Coincidentally an exhibition George IV: Art and Spectacle is currently running at the Queen’s Gallery in Buckingham Palace, but the works only feature a print of this event “as the trust has no original artwork that commemorates this occasion” according to Adelle Hughes at Whyte’s. (Lot 98, €12,000–€18,000)

The second lot, which also involves a ship being blown off course is Ireland 1518, Archduke Ferdinand’s Visit to Kinsale, a series of original ink drawings by Hector McDonnell, commissioned for the book of the same name by author Hiram Morgan.

The book and drawings trace the arrival of Archduke Ferdinand of Hapsburg when, at the age of 15, he arrived in Kinsale during a storm in 1518. He spent four days enjoying Cork hospitality.

At the time the prince, whose parents were Philip the Fair and Joanna the Mad, had a servant named Laurent Vital who wrote a detailed account of the prince’s time in Kinsale.

He appears to have been very taken in by the revealing clothes of Irish women of which he said: “It is as common there to see or touch the breast of a girl or woman, as it is to touch her hand”. His later comments refer to a clandestine wedding and tales of pilgrimages to Lough Derg.

The book, which is included in the lot, argues there is good cause to believe that the Irish Soldiers watercolour by Albrecht Durer was influenced by the illustrations and words of this servant, as the Hapsburg family were friends of artist. (Lot 188, €2,000–3,000)

It will also be interesting to see how well the superb Nude by Mainie Jellett fares (€5,000–€7,000). The auction house set a Jellett record last year when The Land Eire sold for €110,000, more than four times its lower estimate.

As one would expect, Paul Henry and Louis le Brocquy feature but there is a difference to the normal base canvases used by the artists. Henry, for The Bog Road (Lot 15, €50,000–€70,000), uses a heavy coarse canvas which adds much textural interest. Lot 50, Image of Samuel Beckett –  one of 17 le Brocquys in the sale – is a watercolour on tissue paper, which also adds interest “and will definitely appeal to a certain type of collector”, according to Hughes (€15,000–€20,000).

The ROSC exhibition of 1967 at the RDS, which included Francis Bacon, Willem de Kooning, Roy Lichtenstein and Picasso, was controversial as it did not include any Irish artists, despite Child with Doll, a modernist piece by le Brocquy dating as far back as 1949. Lot 48, a lithograph (8/20) of Child with Doll is listed in the sale at €3,000–€5,000.

But a piece that was exhibited at ROSC in 1967, an exhibition which comprised 50 of the “best” living artists of the time, and returns to the RDS 53 years later, is Mastiff by Tadeusz Brzozowski, which last sold through Adam’s in 2007 for €90,000.

Brzozowski twice represented Poland at the Sao Paulo Biennale and once at the Venice Biennale, and his works can be found at the Museum of Modern Art in New York and the Stedelijk Museum in Amsterdam (Lot 63, €80,000–€100,000). whytes.ie