Make a move to Rialto: Dublin 8, but without the wave of gentrification

The city village where property bargains can still be found 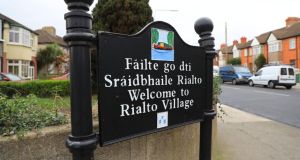 The wave of gentrification that has washed over other parts of Dublin 8 has only lapped against Rialto, leaving the village largely untouched. Photograph Nick Bradshaw

To say that Dublin 8 has experienced a rebirth in recent times is putting it mildly. The postcode is synonymous with youthful energy, an exciting urban feel and plenty going on. Yet the great wave of gentrification has only lapped against Rialto, leaving the village largely untouched (or unscathed, depending on your view).

Its Grand Canal bridge, just south of St James’s Hospital, is how the area got its Venetian-inspired name. The area underwent much change in the mid-20th century with the building of two large-scale corporation housing projects, Fatima Mansions and Dolphin House. The former was demolished at the turn of this century, while Dolphin House has recently undergone major regeneration.

There are several redbrick houses in the area too, built at the end of the 19th century to accommodate workers at the nearby Guinness factory. This gives Rialto plenty of charm, and the area is a nice mix of younger denizens with families who have lived there for years. Many note the inimitable village feel within the locality, but it’s the proximity to busier areas such Kilmainham, Portobello and the Liberties that becomes the icing on the cake.

Rialto is a small village, and one that could use more amenities, say locals. Although the Royal Hospital is a short walk away, the immediate area is lacking in green spaces. Locals have been disheartened that the Rialto cinema site, a local landmark, has been turned into a student accommodation facility. The canal is an asset to Rialto, but one that perhaps hasn’t been put to its full potential as a community space. As with most central spots, traffic during rush hour is hellish. And the construction site of the national children’s hospital nearby is proving a bit of a headache.

First-time buyers can leap on the property ladder with this 1-bedroom cottage at 25 Mallin Avenue (€169,950, via Castle Estate Agents), although it requires a significant overhaul. Number 101 Rialto Court is a well-presented but small one-bed apartment next to the children’s hospital site (€185,000, via City Homes) that might make a good pied-a-terre.

Or, you can snap up one of the area’s desirable redbricks at 43 Reuben Street. This two-bed, one-bath comes to the market in pristine condition (€445,000, via DNG).

Rialto offers renters a slice of Dublin 8 living at a slightly lower price tag than in nearby areas, so properties tend to get snapped up. A turnkey three-bedroom house in Emerald Square recently went on the market for €2,400, while on St Anthony’s Road a one-bedroom flat was recently let for about €1,350.

Lowes Pub in Dolphin’s Barn (27 Dolphin’s Barn Street) is a family-run local with lovely staff and regulars alike. The Bird Flanagan (471 South Circular Road) is a famous local named after notorious practical joker Willie Flanagan, and is great for a low-key evening. The Amber Grill (also at 451 South Circular Road) has been in operation since 1956, and it’s no wonder that this beloved chipper has stood the test of time. The Arch Cafe (3 Reuben Plaza) is a popular lunchtime and breakfast spot, serving up an incredible black pudding and poached egg salad that’s very much worth the trek.

Certainly, many families live there and have happily lived there for generations, but a lack of greenspaces and play areas in the immediate surrounds might make families with little ones reconsider.

40 minutes on foot will get you to Grafton Street. The Luas Red line will get you to Jervis Street in about 15 minutes. Dublin Bus also serves the area well, with the 27, 77A, 123 and 151 meeting different parts of the area.

“I moved to Rialto (the Dolphin’s Barn end) in 2012 and apart from having true Dub neighbours who say hello and would do anything for you, the rental prices have stayed fairly un-crazy. I don’t mind that some people think that Dolphin’s Barn is a bit rough around the edges and run-down. There are good and bad everywhere; besides, I’ve never had any problems here. We also have the Ennis Butchers – the best-kept secret in Dublin.” – James Rice, works in healthcare

Do you live in Artane, Dublin 5? If so, do you have a favourite place or a pet peeve in the neighbourhood? We'd like to hear from you. Email homeanddesign@irishtimes.com