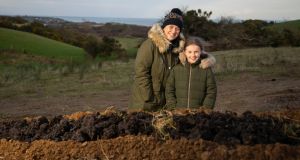 Mags Boland Murphy with her daughter Freya on the site of where their house will be built near Curracloe, Co Wexford. Photograph: Patrick Browne

We all have an idea of our perfect home – for some it’s a traditional country cottage, others a slick city apartment while many more like the idea of living in a house by the sea. But whatever your dream home may look like, it can take many moves to finally feel settled.

This was the situation for Mags Boland Murphy and her husband David, who together with their daughter Freya (and two dogs Missy and Bruno) have lived in many different houses and locations before eventually deciding to build their own home on family land in Wexford.

Having lived in various places throughout her adult life, Mags moved back to her native city of Limerick. But due to her husband’s work commitments (he works in the military) in 2011, it was necessary for the couple and their baby daughter to move to the southeast.

“This is where David is from and had land so at the time, our wish and hope was to build in Wexford as it made practical sense and we could keep our build costs to a minimum during the recession by building on our own site,” she says. “But we didn’t realise it would take five years to get our planning secured nor did we know that life would interrupt our plans.”

Sweden showed me what can be done in a country by a people when simple systems are applied, and smart planning is set in place

In 2014, when David’s work saw him relocated to Sweden, Mags, who is a self-employed business adviser, carried on building her company in Scandinavia thanks to remote access and a little help from business support entities such as Enterprise Ireland in Stockholm.

They rented an apartment in a small town outside the capital and soon got used to a different way of life.

“Very few young people in Sweden worry about buying their own home until their late 30s or 40s,” says Mags. “Apartment living really is the path of choice and it is very much a rental society. The Swedish goal is to raise independent individuals who are able to live their life alone, independently from a young age [in rental accommodation]. They plan very well for housing at different life stages with dedicated apartment areas in towns and cities where retired people will locate to at a certain age. These areas are well serviced with health centres and practical facilities to support the older demographic – and it works, as it’s simple but smart planning.

“For us, Sweden was a big adjustment with a new culture, new language, new way of living and new weather. But it was an adventure and it also showed me what can be done in a country by a people when simple systems are applied, and smart planning is set in place.”

The Irish family really enjoyed the pace of life in Sweden, using bicycles and public transport instead of driving and making the most of the importance the natives put on having a good work/life balance. After a year (in which Freya learned to speak Swedish) they moved back to Ireland and began once again to look for somewhere to put down roots.

Having previously decided on the southeast, they headed back to Wexford and decided to follow their original plan of building on a family site. But planning permission still hadn’t been granted so they decided to rent a house while they waited for the go-ahead to build their forever home.

And while Mags relished the beginning of another adventure, country life proved something of an adjustment having always lived in cities, both in Ireland and abroad.

“Moving to such a rural area was a massive change for me,” says the mother of one. “I found it very difficult in the beginning as my daughter was small, my husband away for long hours and I didn’t know a soul, so I had to make a big effort. But it can be difficult when you are in your 30s, in a completely new area, and I did feel isolated. But I was starting my business, Bofin Consultancy, at the same time so just got on with it.

I will always remember those who made me feel welcome, helped me in small ways and gave me the hand of friendship. It meant so much and still does

“Having said that, there is a great sense of community here and that is something I value so much. And it really helped that the area is very special with lots of good people. I will always remember those who made me feel welcome, helped me in small ways and gave me the hand of friendship. It meant so much and still does.”

Obtaining planning permission was difficult as the site they originally planned to build on is within close proximity to an SAC (Special Area of Conservation) which required specialist imaging which was too costly to justify.

So they applied again for planning on a different patch of land where there was already an existing building – however, this was delayed due to the “misreading of application files”. But despite the couple being at their “wits’ end” with all of the obstacles they had to overcome, Mags and David finally got the go-ahead to build their house and are still living in a rental property in the village of Screen, envisaging their dream home while they wait for the project to get under way.

“We are building on family land close to the sea and the house will be a mix of old traditional with new modern styles,” says Mags. “We are going for open-plan living, which we had in Sweden and loved. It will be a two-storey farmhouse and the interior will be a modern Georgian mix – hopefully.

“We have it all in our heads but now we need to make it happen and just get it done. We are doing this once and aiming to keep our mortgage as low as we can as there is no use in building a big house if you can’t actually afford to live.

“We will be the sixth generation to live on the site, which is kind of nice. We are hoping it will be done and dusted in 12 months, which may be wishful thinking as with every build there may be delays.

“The rental house we are in – a dormer bungalow with ample room – is set in the village and is 2km from our site so that is great. We have a large back garden which our two madras love and it gives us the space we need to breathe. My business offices are located 20 minutes away, but it is also handy to have a small office in the house as well. The one challenge is that is difficult to heat and eats oil, which is a big expense.

“We are lucky to have a great landlady. Even though it is lovely and well located, it’s not our own so it’s hard to make a house which is not your own a home when it comes to decorating, because as with most rentals you are bound by conditions and are limited to what you can do. However, we look after the house as if it were our own and treat it the way we would like our house to be treated so to speak. The most important thing for me was that we made it as much our home as possible for us and for our daughter.”

Having moved several times in the last decade, Mags believes that life will be better in so many ways when she and her family finally move into their new build.

“I think it will make life so much more balanced and less stressed,” she says. “My husband travels with his work and will be due to go overseas again in the next two years – so a big thing for us is to have that forever home where we can come back to, just shut the door and be a family. We both work hard and to have that stress-free space is so important to us. I want our daughter to know that this is her home, she will have her own room painted the way she wants, and it will be hers.

“And I want our sanctuary and that cosy corner where we can switch off and breathe with friends and family. We know that our home will be a reflection of our tastes and our comforts and at this point I can almost feel and taste the house. I wish I had a magic wand and a bottomless pit of cash to put into it, but we don’t, the cloth has to be cut to fit – but we are looking forward to getting on with it.”

Share your home story
Have you recently renovated a house, or built a new home from scratch? If so, we’d love to hear your story. Please email homeanddesign@irishtimes.com