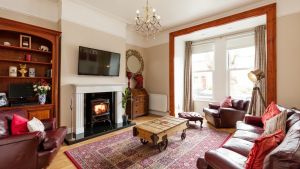 Hollybank Road is one of Drumcondra’s secret streets. While within a few minutes’ walk of Anderson’s Creperie, Fagan’s Pub and multiple cross-town bus routes, it feels far removed from the busy pace of the main thoroughfare.

The leafy street has even become a low-key embassy belt with the Irish Ambassador to Estonia residing here in what was once the heart of the city’s flatland.

Number 65 was in bedsits when its owners bought it in 2015 for €290,000. They moved into the flat at garden level and started to return it to a single unit, moving up through flats in the house as works progressed until they reached the top flat to the front, now a roomy master bedroom with shower en suite. Each unit had a kitchenette and bathroom facilities and they estimate it took about nine skips to clear it.

Accessed via two sets of granite steps, the house today makes a fine family home. It has ceiling heights of 3.1m at hall level and a livingroom to the front features a Stanley stove inset into a marble surround and black granite hearth. The original interconnecting doors and opening was removed in favour of a newer but smaller aperture that leads through to the kitchen.

From here, as with all the rooms to the rear, there are spectacular views of Dublin’s northside rolling off into the distance. Landmarks such as the dome of the Corpus Christi Church on Griffith Avenue, Griffith Park and the copper roofs of St Pat’s stand out on this elevated site.

The first of the property’s three bedrooms is a dual-aspect room on the hall return with the other two located on the first floor.

At garden level there is a room that could work as a den, study or even diningroom, at the base of the stairs where the 2.5m ceiling heights are still above standard and to the rear there is a self-contained one-bed unit that could work well as accommodation for an au pair or grandparent or generate income under the rent a room scheme.

The house also has a sizeable northwest-facing garden that extends to 30.4m (100ft) and has vehicular rear access. A neighbour has secured approval to build a mews to their rear and this is something the next owner could also consider, subject to planning. The property is seeking €825,000 through agents SherryFitzGerald.