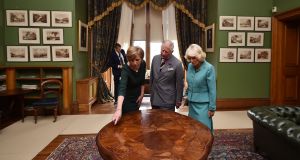 Prince Charles and the Duchess of Cornwall are given a tour during their visit to Muckross House in June last year. Photograph: Charles McQuillan/Getty Images

Thousands of fires, allegedly set by ranchers and farmers seeking to clear land for cultivation, currently burning across Brazil’s Amazon rainforest, have caused international outcry during the past week. Relaxed laws by the Brazilian government and its pro-development policies are resulting in rapid deforestation of the Amazon – the lungs of our planet – at a reported rate of five football pitches every minute.

In medieval Ireland under our Brehon laws, considered by many to be the oldest, most egalitarian and extensive of medieval European legal systems, the Irish had a proud record of preserving the natural environment, and trees in particular.

In the Bretha Comaithcheasa, which translates as the Laws of the Neighbourhood, trees had a hierarchical system according to their economic value, and penalties were graded according to the class of tree harmed, and the form of damage inflicted. For example if you chopped down a hawthorn tree, the forfeit was a dairy cow.

Arbutus Unedo, or the strawberry tree, which is one of just 15 of our native plants classified as Lusitanian flora (as it does not grow in Britain), was listed as a second division plant and permitted to be burned for the production of charcoal.

Today, the tree with its strawberry shaped fruits, which can grow up to 15m, is rare with the exception of Killarney National Park, which remains the most extensive covering of native forest in the country.

In terms of heritage, the pieces are unique as a design movement indigenous to Ireland

In the 1800s, with the advent of tourism in Killarney, enterprising cottage industries in the town established Killarney woodwork, a highly decorative marquetry using Arbutus wood. And in 1851, local woodworker Jeremiah O’Connor took his wares to the Great Exhibition in London. Subsequently one of his tables was purchased by the Prince of Wales in 1858.

In 1861, a davenport and cabinet were presented to Queen Victoria on her visit to Killarney, which are now in the National Museum of Ireland. It is estimated these gifts to the queen involved more than 500,000 tiny pieces of wood, such was the level of craftsmanship.

While her visit placed Killarney firmly on the tourist map, with visitors buying small pieces of woodwork as mementos, it cost her host Henry Herbert dearly. Being saddled with the extravagant cost of hosting the royal family, he was forced to sell his home Muckross House to the state soon after.

The work is very distinctive, with marquetry depicting local scenes, such as Muckross House, Ross Castle and regional flora and fauna.

With current decor trends, they have somewhat lost favour, due to their high level of ornamentation, but in terms of heritage, they are unique as a design movement indigenous to Ireland.

As the industry only produced wares for a couple of decades, what remains are the odd items that comes to auction, those in our museums, and those at Kensington Palace.

But as collector’s items, they are viewed as national treasures which is evident in recent sales. In 2016, a small tea table fetched €11,000, and an exhibition quality davenport achieved €31,000 the same year, both through Adam’s on St Stephen’s Green.

Sheppard’s has three small pieces on offer in their Gems in the Attic sale, which include two book slides (€200-€300 each) and a lovely pen and ink stand, with antler-shaped sides, evocative of our native red deer. The only herd believed to be indigenous to Ireland are those now found in Killarney, according to the Irish Deer Society.

Both auctions also feature international inlaid pieces, with a profusely inlaid demi-lune marquetry table at Sheppard’s seeking €600-€800 and two beautiful parquetry pieces at Adam’s in the form of a kidney-shaped writing desk (€800-€1,200) and a work table with an internal mirror (€400-€600)

A second chess board features in the Adam’s sale: a Russian porcelain set depicting the Battle of Borodino, where fires were also a significant feature, as the Russians set their own crops and villages alight denying invading French troops their use.

The pieces depict opposing French and Russian forces, who fought in what is considered to be the deadliest day of the Napoleonic Wars, and immortalised in Tolstoy’s War and Peace and in Tchaikovsky’s 1812 Overture. (€500-€800) See adams.ie, sheppards.ie and muckross-house.ie