Location, light and an artistic eye in Portobello for €800k 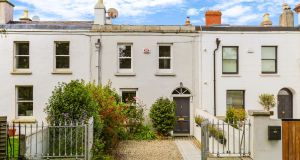 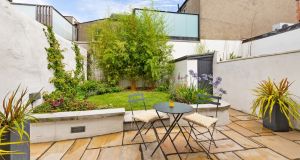 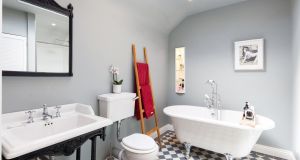 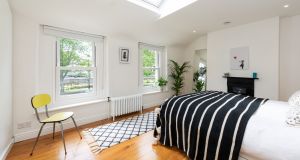 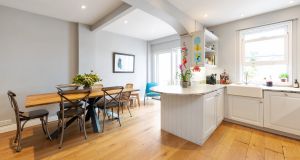 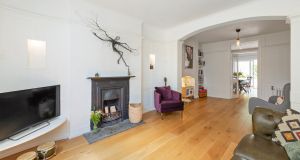 This article is 6 months old

Number 3 Windsor Terrace, a charming, light-filled house, dates from 1820 – according to the National Inventory of Architectural Heritage – and is home to Catherine Harte and her partner Andrea Lenzi.

The couple purchased the 128sq m (1,378sq ft) three-bed in 2016 for €640,000 and gave the property a complete upgrade, which involved reroofing and rewiring throughout, with the addition of a new bathroom upstairs.

Previous owners installed Velux windows throughout the property, which really brightens up the interior, and because the front of the house faces south, there is also huge solar gain, in addition to an abundance of light.

The interior palette is very simple. Apart from the duck-egg blue in the kitchen and bathrooms, the remainder of the property is an off-white, allowing the couple’s artwork to take centre stage. Indeed, inspiration for this may well come from Catherine’s place of work: the Irish Museum of Modern Art (IMMA), where she is human resource manager.

Pieces of art dotted around the house include works by Meadhbh Ní Eidhin, as well as a remarkable sculpture, Icarus by Glenn Gibson, which hangs over the open fireplace in the livingroom. “It [Icarus] is a real talking point – as people either love it or hate it,” Catherine says.

At hall level, the two reception rooms are both used as living spaces as there is ample room in the extension, which was installed by previous owners, to accommodate a large dining area.

Off the kitchen lies a courtyard garden, which has been given a complete overhaul, with a paved area and raised lawn with bamboo, climbers and agapanthus.

The front of the property benefits from off-street parking, and a riparian setting along the canal.

“Sometimes it’s lovely to just disappear upstairs [to the principal bedroom] as it is so relaxing to look out on the canal. It is actually really quiet as our road is one-way so there is no traffic, apart from neighbours coming and going.”

And those neighbours include some good restaurants. Just two doors away is Locks, which offers fine dining, and within a two-minute stroll is I Monelli, an authentic Italian which won an accolade at the Irish Restaurant Awards in 2018.

The three-bedroom house in turnkey condition is on the market through Owen Reilly with an asking price of €800,000.

‘Doctors in Ireland are under enormous pressure’: Why medics self-medicate
6

Bulling for a bargain at Spanish wine sale
7