Portobello two-bed bought with proceeds of a winning poker game 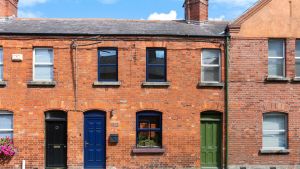 In a scene that could make the opening scene in a movie the poker-playing owner of 42 Martin Street in Dublin’s Portobello used a winning streak at a poker contest in Medellin, Columbia, not to swan around the world but rather to put a down payment on the period redbrick.

“I loved playing cards, even as a kid,” says Robbie Renehan who started playing poker at college and then leveraged those talents to work as a trader in London. “It’s a similar skillset. It’s mathematical and about probabilities and analysing situations.”

The win took place in 2012. At the time PokerNews.com wrote that he “surprised everyone at the Allegre Casino in Medellin, Colombia, by grinding his way home and claiming the top prize of 264,700,000 Colombian pesos”.

He won an entry ticket plus accommodation for five days in a hotel and played with about 350 other hopefuls. “It was a surreal experience. While some players wanted to gamble wildly, one was offering tequila shots to every player at his table, the majority are a lot more sedate, college geeks with headphones on. The win was substantial, about €150,000 and did not feel as good as it should feel, he says.

“It was a hobby and for a few years I made a good living out of it but it is seriously time consuming. I was playing from 7am, 16 hours a day. It sounds glamorous but it’s not,” he says.

The cash came in really handy when paying for the building works, which the bank would not fund. He also used it to pay for an MBA at the UCD Smurfit School and has since moved into a business role at his father’s firm, Adapt Engineering.

He bought the house in 2017, paying €400,000 for it, according to the property price register and spent about six months gutting it. John McCarthy of Coll + McCarthy Architects reconfigured the layout, moving the stairs to the front and straightening it to rise directly up to the first floor, so that it took up less floor space at hall level. He extended the property out into its yard and insulated the floors, walls and roof.

The house now measures 99sq m/1,066sq ft. On the advice of his uncle, developer Eugene Renehan, he spent the lion’s share of the money “on stuff you don’t see” to get the fabric of the building right. It now has a B3 Ber rating.

There’s a matt black kitchen to the front, whose units were made from recycled wood and where you can see the canal from the kitchen sink. Inky blue windows by Munster Joinery add a pop of colour.

The ground floor layout is semi open plan with an opening leading through to the living room, which has been extended out into the back yard and where sliding doors now open out to an east-facing terrace. A second opening in the wall allows light through from front to back but ensures each area is separate.

Next to his property is a green door that had been used by the Dublin Artisan Dwelling Company as a janitor’s office at ground level but the void above was distributed evenly between number 42 and its next-door neighbour. It means that this property has two decent-sized double bedrooms as well as a shower room upstairs – not the case in many of the houses on the surrounding streets. The master is to the front and you can see the water in the picturesque Grand Canal reflected in its mirrored wardrobes.

Now a father of two he’s trading up. The two-bedroom one bathroom property, which is in walk-in condition, is asking €575,000 through agents Galvin Property.