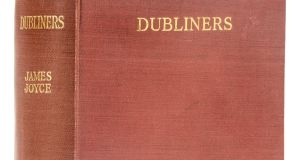 Recently discovered literary treasures, which originated in Italy and now reside in Glasgow, are two works by James Joyce: Dubliners and A Portrait of the Artist as a Young Man.

“This 1914 first edition of Dubliners is the fourth known signed copy to have appeared at auction, and was previously unrecorded” according to Max Hasler of Forum Auctions in the UK, who estimates the book’s value to be in the region of £100,000-£150,000.

The book was owned by and inscribed to Beatrice Randegger, one of Joyce’s students when he lived in Trieste.

“She was a private student of Joyce in Italy. In addition to teaching at the university he also tutored private wealthy clients. The fact she had the signed copy of Dubliners from the same week it was printed, and a signed copy of A Portrait of a Young Man – which Joyce gave her when he returned to Trieste – lends us to believe that Joyce was very fond of Randegger,” says Hasler.

The books were then passed down to Randegger’s daughter, and upon her death placed in a box and stored in a warehouse for 30 years. It was only this spring when her son – the current owner based in Glasgow – decided to sort through her possessions that the books were discovered.

“He had done his homework and knew the books were valuable, but was absolutely delighted with what they could achieve; it is a life-changing amount of money for him”

Much like Ulysses, the publication of Dubliners was fraught with objections, and Joyce submitted the script 18 times to 15 different publishers.

But with Dubliners, it was the printers, not publishers, who objected to set the tale of Two Gallants, citing obscenity.

With a retort from Joyce stating that it “was one of the most important stories in the book”, he eventually redacted some words, and it was finally published in 1914, allowing the story of protagonist Lenehen who dreamt of finding “a simple minded woman” who could provide him with money to see the light of day.

This and A Portrait of the Artist as a Young Man (1918); a signed first edition, also inscribed to Randegger (£15,000-£20,000) will be auctioned at the Fine Books, Manuscripts and Works on Paper auction in London on September 26th.

And in Blarney last weekend another treasure was unearthed, this time a piece of blue and white Chinese porcelain.

The ceramic flask, owned by a Cork family with historical British colonial links, was inherited by an elderly relative in the 1960s, and Michael Sheppard of the Durrow auction house estimates its value to be in the region of €40,000 to €50,000.

“All the indications at first impression suggest that the flask is of the Yongle Period (1402–1424) taking into account colour, size, touch, weight, and bubble distribution” says Sheppard.

However, estimating Chinese ceramic values is notoriously difficult, according to the auctioneer. “

While Asian objects regularly achieve multiples of auction guide prices, with rarer pieces there is less precedence, and hence a greater challenge.

That said, the €40,000-€50,000 estimate is conservative, and it wouldn’t be a surprise if it made a lot more” says Sheppard, who will auction the flask, measuring over 50cm in diameter, at the Masterworks sale on November 7th in Durrow, Co Laois.