Tucked away in Terenure with garden studio for €750,000 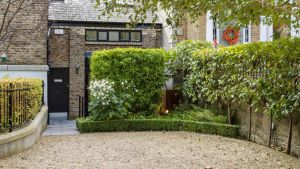 Though not a typical Coach House, the property at 31 Terenure Road East – near the crossroads of Orwell Road and Rathgar Avenue – is attached to Dunlewy, a Victorian grand dame which sold for €4.6 million in 2006. The Coach House which was built in 2005, last sold in 2013 for €515,000.

The house shares an entrance with Dunlewy – set behind a formal entrance – and is deceptive, as the interiors extend to 102sq m (1,098sq ft). It could be missed on passing, as it lies discretely behind a wall of bamboo, and it melds well with the main house due to the use of the same old bricks on Dunlewy.

On the ground floor is a large open-plan kitchen/dining and living room, which opens to the rear garden through a wall of concertina doors, allowing the garden – which extends to 28ft – to be an integral part of the house in good weather.

The kitchen, though not large features high-end Gaggenau appliances and opens to a tiny courtyard to the front of the house – hidden behind the wall of bamboo for privacy.

What will attract buyers, besides the location, which is served by an excellent bus corridor, local private schools and Rathgar village itself, is the additional space provided in a studio at the end of the garden.

Extending to 12sq m (130sq ft), it is currently used as an office, which will tick a box for those wishing to work from home, but could also make a fine additional entertainment room away from the main house.

Upstairs lie three bedrooms and a bathroom with overhead Velux adding much light to the internal space.

The principal bedroom overlooks the front of the property, with the two smaller doubles lying to the rear.

There is an abundance of storage throughout the house, both in the kitchen and living room – secreted in a wall of seamless presses – which also house the utility units.