Is Stoneybatter really the coolest neighbourhood in Ireland?

Time Out magazine loves Dublin 7’s urban village. What do locals think of it? 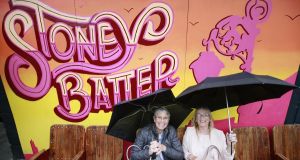 Stoneybatter: the Dublin village has a strong sense of community. Photograph: Nick Bradshaw

Earlier this morning in Stoneybatter I met one of my neighbours, a born-and-bred native, bringing his grandchildren to the park. “Did you hear that Stoneybatter is now one of the coolest places in the world?” he asked, shaking his head. “What was the person that wrote that smoking? Hash?”

Although I can’t attest to the proclivities of the Time Out contributor who wrote its entry, the magazine has nonetheless anointed the Dublin 7 neighbourhood one of the world’s 50 coolest. Beating neighbourhoods in Hong Kong, Budapest and Prague, the Batter is described as “one of the most central places” in the city “where young people can still afford to live (just), and the neighbourhood pride is strong”.

It mentions “hidden gems” like the Belfry bar and the more established L Mulligan Grocer, as well as Grano, a relative newcomer that has just been named ethnic restaurant of the year at the Georgina Campbell Irish Food & Hospitality Awards.

There has certainly been an energetic shift in Stoneybatter of late, although, depending on whom you ask, it may or may not be for the better. The artists and creatives who didn’t buy property before 2002 have moved to more affordable areas. The sound of roller suitcases being pulled through the warren of terraced streets is increasingly common; the proliferation of key boxes outside front doors similarly hints at a spike in local Airbnb lettings. Student accommodation blocks springing up hither and thither have brought an influx of moneyed, ebullient students.

If the wind blows the wrong way the vibe at certain hangouts can range from beerily romantic to smugly self-congratulatory. Because when Time Out says Stoneybatter is a place where young people can still afford to live, it omits to mention that these are young people with rich parents, or who don’t mind living with a bunch of housemates.

Tourists came to Stoneybatter in their droves over the summer to see what the fuss was about in the place that the writer Rob Doyle called, in the Guardian newspaper, Williamsburg by the Liffey (a term locals abhor).

Long-standing residents are bemused and aghast that a pint costs more than €5 at the Glimmer Man pub, that they have two Japanese restaurants on their doorsteps, and that at some local stores you can part with €30 for a scented candle.

I suppose Time Out’s accolade raises the question of what makes a place cool. Almond milk at the local Centra? A high skinny-jean quotient? Designer dogs yapping next to fancy buggies? Coffee every which way you look? Vegan brunches? Because Stoneybatter has all of this, but the qualities that appeal to its residents go far beyond the ornamental.

Stoneybatterites are hugely proud of their sense of community. Everyone who lives here knows who Maureen is, or Anto, or Christian. (They don’t need surnames.) Some call it the Shire, and that’s what it feels like for them: a rural village within a city. They enjoy Cheesy Chewsday at Walshs, on Tuesdays (of course), pub quizzes at L Mulligan on Sundays, candlelit yoga at the Elbow Room on Fridays and voluntary clean-ups on Saturdays.

I’ve never known a sense of neighbourly belonging like it. I’m a relative newcomer but have befriended the original residents on my road, as well as the new families who moved in alongside us. It’s a relatively harmonious set-up, and it feels peaceful and safe. Residents who have been here for decades are proud of the neighbourhood. But they don’t care much about Lilliput Stores as a “must do”, the delicious baked goods at Pender’s Market or Grano’s awards haul. They like being near the Phoenix Park, or within walking distance of town, or near their families.

Articles like Time Out’s may be flattering, but there’s another side to it. The coolness factor means younger members of local families have had to move away, as few can afford to pay €2,000 a month to rent a two-bedroom house. And, really, there’s nothing cool about that.