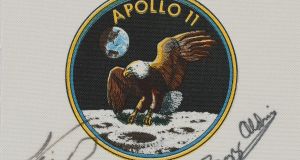 Thursday, July 20th, is the 48th anniversary of the Apollo 11 moon landing in 1969. It’s difficult to believe now but space travel was routine in the late 1960s and early 1970s. The US sent six manned missions to the moon and 12 astronauts walked on the lunar surface. The Apollo 11 landing was, arguably, the most exciting good news story of the 20th century – an astounding feat of science, technology and human courage. Neil Armstrong (who died in 2012) became the first man to step on to the moon, uttering the famous phrase: “One small step for man, one giant leap for mankind.”

The event is recalled in an auction titled Space Exploration in Sotheby’s, New York, on July 20th which includes the “Apollo 11 contingency lunar sample return bag – used by Neil Armstrong on Apollo 11 to bring back the very first pieces of the moon ever collected – traces of which remain in the bag. The only such relic available for private ownership.” The estimate is a sobering $2 million-$4 million (€1.75 million to $3.5 million).

Nearly all of the equipment from the mission is housed in the US national collections at the Smithsonian Museum but, according to Sotheby’s, a recent court ruling has allowed this to be the only such artefact in private hands. Cassandra Hatton, the specialist for the sale, said: “This seemingly modest bag was part of mankind’s greatest journey, and played a crucial role in the single most important scientific task of the Apollo 11 mission – to bring back the very first sample of lunar material ever collected. To be able to see such an object in person is a once in a lifetime opportunity. It is one thing to read about going to the moon; it is quite another to hold in one’s hands an object that was actually there, and that still carries traces of that faraway place.”

Other highlights include two sheets from the “Apollo 11 flown flight plan”, one which contains extensive mission notes by both Neil Armstrong and Buzz Aldrin on their last full day in space before their planned return to Earth ($25,000-$35,000); and a crew-signed Apollo 11 emblem flown to the moon by command module pilot Michael Collins ($40,000-$60,000).

Of course, the first man in space was a Russian and that country’s major contribution to space exploration is also acknowledged. The “records file on the first flight by USSR citizen cosmonaut Yuri Gagarin made on spaceship-Sputnik Vostok April 12, 1961” is estimated at $50,000-$80,000. Sotheby’s says this was the official English-language report prepared for submission to the Fédération Aéronautique Internationale and signed by cosmonaut Yuri Gagarin and the chief engineers of the Soviet space programme.

50 people to watch in 2021: The best young talent in Ireland