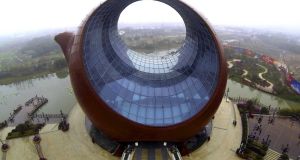 Residential property prices in Dublin are growing at a faster rate than those in global metropolitan cities including New York, London, Paris and Tokyo.

Research from Knight Frank Global ranks Dublin 53rd in its world average rankings of 150 cities worldwide, with prices in Dublin rising by an average of 8.3 per cent in the last year, compared with 4 per cent in New York (ranked 94th); 3 per cent in London (ranked 107th), 3.7 per cent in Paris (ranked 100th) and 3.6per cent in Tokyo (ranked 96th).

Traditionally strong European and North American cities were left in the shade by the continued march of Chinese cities, which hold seven of the top 10 slots. However Shanghai and Beijing, previously in sixth and third position, have slipped out of the top 10, and the real growth (of 20-30per cent) is among second tier cities, such as Wuxi (ranked first) and Nanjing (second).

Oslo was the only EU country to make the top 10, just taking the number 10 slot, with annual growth there of 21 per cent. Reykjavik (ranked 18th) was hot on its heels with growth of 18.3 per cent. The Netherlands is showing strong growth with the country’s four largest cities. Amsterdam, Rotterdam, Utrecht and The Hague all show price growth of more than 10 per cent in the year to March 2017. Barcelona and Lisbon are also gradually moving up the rankings.

Toronto ranked fourth overall with alarming annual growth of 24.8 per cent, However, the report predicts that the recent introduction of a new foreign buyer tax of 15per cent will moderate growth to mirror more closely that of Vancouver at 12.2per cent.