At Home sale includes enough silver, plate and glassware to have a very fine party 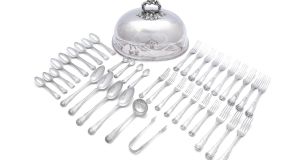 “A man who can dominate a London dinner-table can dominate the world,” quipped Lord Illingworth in Oscar Wilde’s A Woman of No Importance.

The Victorians started the whole notion of formal dinner parties, where handwritten invitations, ladies in kid gloves, men in tall hats and tables laden with gourmet delights were de rigueur. Today it is a far more relaxed affair, focused on conversation and food rather than stuffy Victorian etiquette.

The Adam’s At Home Sale on Sunday, February 23rd, at its salesroom on St Stephen’s Green, has some interesting items for dinner parties and entertaining.

First up, and a definitive conversation starter should your guests be a little on the dull side, is a collection of George III silver flatware consisting of forks, spoons and a silver-plated domed meat dish cover engraved with the motto Vota Vita Mea (My Life Is Devoted).

The pieces weigh about 73 troy ounces in total. Besides featuring the makers’ marks of William Eley, William Fearn and Richard Poulden, they are engraved with a depiction of a bound slave.

They were once owned and used by Robert Hagan, the man who became known as the “freer of slaves”. Hagan was born in Magherafelt, Co Derry in 1794, and as an officer in the British royal navy travelled the world. While working on the coast of Africa, he commanded the Prince Charlotte and Prince Regent colonial vessels.

He was brutally opposed to slavery, and it is thought that he captured 40 vessels and saved 4,000 Africans from the perils of bondage. He was awarded a knighthood for his deeds and spent his post-naval life in Cobh, where he was an inspecting commander of the Irish Coast Guard (Lot 121, €1,000-€1,500).

Lot 248 is a large, 18th-century Chinese-export porcelain dinner service, decorated with twin trellis borders and gilt-edged rims, and also has a special insignia. Here an elaborate crest is filled with the initials GH for Col Gilbert Hogg, who worked as a captain in the East India Service. He was recorded as championing the conditions for lower-grade servicemen in the Indian Mail and Register of Intelligence Vol 4. There is a brief reference made to Hogg’s dinner service, when it was made and sent to Ireland in 1790, in David Howard’s book Chinese Armorial Porcelain (€7,000-€10,000).

A stunning inlaid rosewood dining table decorated with brass banding also features. It is a fine example of regency brass-banded furniture, which was common for this period and would make the perfect centrepiece to a dining room (Lot 235, €3,000-€4,000).

No Irish auction catalogue seems to be complete without some unique Chinese offerings these days, and the sale lists a pair of large bronze, dragon-tripod censers from the Qing dynasty, which are the top lot in the sale. “They are unusual in their size, suggesting they had an important function as altarpieces for burning incense,” according to Niamh Corcoran of Adam’s (Lot 190, €10,000-€15,000).

One of the loveliest pieces in the catalogue is lot 260: a Regency mahogany metamorphic library chair. The design, by Morgan and Sanders, allows the chair to become a set of steps when inverted (€1,500-€2,000), adams.ie