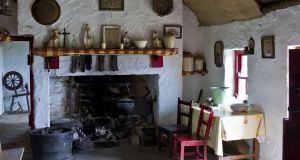 A variety of items used in rural Irish dwellings in the 18th and 19th century will be on auction. File photograph: Getty

A large collection of Irish country furniture will be auctioned at the Irish Country Interiors sale by Victor Mee at its Cloverhill auction rooms in Co Cavan on February 26th.

The items, which were used in rural Irish dwellings in the 18th and 19th century, come from a single owner collection and are a rarity on the Irish auction circuit.

The 1841 Irish Census not only classified the population but also the types of dwellings that Irish people inhabited. The results show that almost half of the population of rural Ireland at that time lived in single-roomed dwellings. This percentage increased along the western seaboard, demonstrating the widespread rural poverty in the 1800s.

In her book Irish Country Furniture 1700-1950, which appears to be the most comprehensive study on what is also called vernacular furniture, Claudia Kinmonth suggests that most of the pieces to survive (outside of Irish museums) are “owned by an admirably stubborn breed of people who have resisted persistent offers of cash from tenacious dealers” with “such dealers having begun to appear with complete suites of modern furniture with which to barter”,

The 1960s saw a surge in popularity for these pieces, and many were exported. Today there is still a demand for these items, which serve as a reminder of the humble cottage living of rural Ireland. The selection in the catalogue is like a history lesson in the interiors of these modest homes.

There are not many tables listed, as the hearth was the focal point of these dwellings, and tables are considered by many Irish historians to be of more recent origin.

In those days if a home had enough wealth to have a table, they were mostly in the form of “let down” or “falling” tables, whereby they were held flush against the wall with an iron pin and let down for use. Many of these had special holes near the edges to hold boiled eggs and were taken down to feed a crowd, in times of harvest and thrashing, where neighbours helped each other.

The chair was one of the earliest types of furniture to be introduced to the Irish home, and the Victor Mee sale has a good selection of beautiful old Irish chairs including a number of early hedge chairs.

These chairs, made from branches and twigs from nearby thickets, lack modern binding elements like nails and screws and were crudely pieced together. This rudimentary crafting process ultimately saw the deterioration of many of these pieces over time, and so adds to their value and desirability today.

The highlight of the chair offerings is lot 312, a rare pair of 19th century pine and rush chairs in their original paint. (Furniture was painted to keep it clean and help preserve against dampness.)

Crafted with a working drawer under the seats, what makes these chairs a rarity is very few survived due to being made with rush, which was susceptible to the ubiquitous dampness in rural cottages (€1,200-€1,800).

The kitchen dresser is the best known piece of traditional Irish furniture. Some larger versions had a coop in the base where the household’s chickens lived, as eggs were a staple of the rural diet.

If a family could not afford a dresser, they used a more primitive form, whereby simple recessed stones in the cottage walls could hold pewter or utensils. In the poorest of homes, these often included shells and hollowed out potatoes used as drinking vessels.

The sale lists an array of old dressers, the highlight of which is lot 207, a 19th century fiddle-back originally from Co Monaghan (€500). Standing more than 2 metres tall, Victor Mee describes the piece as “one of the most authentic pieces of vernacular furniture I have seen in many years.”

The dresser also became the place to display items that a family could afford to purchase, such as crockery and delph.

The sale lists a large selection of simple and decorative pieces including a collection of Irish spongeware ceramics. As with furniture, handmade spongeware was authentic to the region it came from.

For this reason no two pieces are identical and are coveted among collectors. “Due to their fragility, many antique spongeware ceramics have been lost over the years due to breakages, so we expect this mass collection of spongeware to garner a lot of interest from bidders,” says Mee.

Five early 19th century rushlights also feature and give an insight into how Irish people lit their homes.

Formed on an iron stand, these pieces used dried pith of rushes which were soaked in animal fat to illuminate their homes at night. Other vernacular ironworks listed are a selection of hardening stands and toasting forks, including lot 170, an early 19th century toasting fork with heart decoration (€50-€100).

A wonderful selection of butter prints feature, which are beautifully carved in various local woods. These were used by small homesteads of two cows, with the woman in the household decorating her butter to sell locally (€40-€120).

One of the top lots is an old penal cross, which serves as a reminder to the true hardship that most of Ireland’s rural population faced in addition to poverty, famine and the cold (lot 479, €1,000-€3,000).