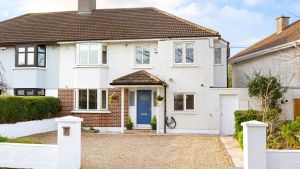 The owners of 13 Weston Park in Churchtown wisely opted to leave their front reception room exactly how they use it for the viewings – as a vibrant playroom with their young children’s colourful paintings covering the walls and toys stacked everywhere.

Other sellers might have been tempted to stage the room, clean it out and put in grown-up neutral furniture to remind buyers that it is originally intended as a living room – but the reality is that the buyers of this five bedroom, extended and updated semi (the BER is B2) are likely to be families with young children who will be well-used to this scenario.

The owners did significant work on the 1950s house twice – in 2015 extending to the side to make the house double-fronted and to add extra bedrooms, a utility, and a renovated family bathroom, en suite and new downstairs toilet and shower. The second phase a year later involved extending to the rear to create a large, very contemporary open plan kitchen, living and dining space.

The ceiling heights in the extension, together with the large roof light, side rectangular window and custom-built, German made wall-sized glazed doors opening out to the garden make this a bright, very family friendly space. The kitchen is from Kube with a Silestone quartz topped peninsula – there’s plenty of storage behind the sleek glossy cupboard doors. Other attractive features in this new room include a cream-coloured stove in the fireplace, built-in shelving and underfloor heating. There’s a sliding glazed door opening into the front reception room/playroom. Out in the hall Smart Storage has been installed under the stairs.

There are five double bedrooms (one with en suite) and the family bathroom upstairs. The view from one of the back bedrooms is somewhat dominated by the light box in the roof of the extension below – a trade off perhaps for gaining the extension’s tall ceiling height.

To the front of number 13 is a large green area so there is an attractive open aspect from the front windows – and extra play space for the children. There is off-street parking for several cars on the newly gravelled garden. Sherry Fitzgerald is the agent, seeking €875,000 for the Churchtown house.

How do I convince my wife that I’d be a great stay-at-home dad?
4

The subtle signs that point the way towards haemochromatosis
7