What’s coming up for auction in November 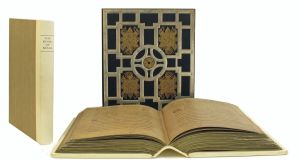 A copy of the world’s most famous medieval manuscript The Book of Kells, will feature at the forthcoming Collector’s Cabinet sale at Mullen’s of Laurel Park on Saturday November 23rd.

Ireland’s greatest cultural treasure, dating from the ninth century that documents the four gospels, has resided at Trinity College since it was donated by Henry Jones, Bishop of Meath in 1661.

As only one page is turned each week, it would take seven years to view the entire contents of the historical tome

Described in 1007 as: “The great gospel book of Columcille, the holiest relic of the western world”, all bar two pages of the 680-page manuscript are decorated with a wealth of symbolic and mystical paintings.

In 1986, Trinity College Library and specialist facsimile publisher – Faksimile Verlag in Lucerne – began a four-year collaboration to produce the first complete colour facsimile of the manuscript.

Photographing the manuscript was challenging, not least was the access to the most protected manuscript the firm had ever encountered, and the fact that the printers had never come across some of the colours used in its illumination.

Previous copies of the book from 1950 were in black and white, and those in a 1974 edition had only 93 pages of colour – about a seventh of the total number of colour plates.

Further offerings are three documents, now relevant with the approaching centenaries of the Anglo-Irish Treaty and Civil War. They chart the building animosity of the time.

The first, a pro-Treaty campaign poster from the 1922 General Election which, through combative prose, outlines de Valera’s inconsistencies in his position on obtaining a Republic (€500–€700).

Secondly, a copy of An Saorstat newspaper from April 15th, 1922 features a mock proclamation by Roderick O’Connor which states “evilly disposed persons or bodies unlawfully engaged in a conspiracy to accept freedom for their country through a treaty” (€200–€300).

The third is a communiqué from the Four Courts by Rory O’Connor, describing the attack on the Four Courts by troops on June 28th, 1922, effectively the declaration of the Irish Civil War, in which between at least 1,500 people died, with an estimated £50m cost to the state (€700–€1,000).

An interesting lot is a selection of military badges collected by a Welsh teenage girl.

During the first World War, the teenager sent hens’ eggs to soldiers at the Western Front, with her name and address pencilled on the eggs. Some soldiers wrote to the teenager, sending her badges with their tales from the trenches, where over 700,000 of their fellow servicemen died (€150–€200) See mullenslaurelpark.com