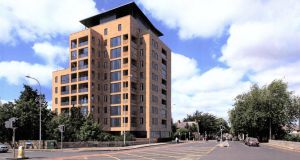 An impression of the proposed 11-storey over basement apartment block on Eglinton Road, Donnybrook, Dublin 4.

A decision by Dublin City Council last month to refuse planning permission for a proposed 11-storey over basement apartment block on Eglinton Road, Donnybrook, has been appealed by the site’s owner to An Bord Pleanála.

The proposed luxury apartment development comprised 62 units, communal terraces, a gym and meeting room for residents along with 20 car parking spaces. The site, occupied by the 1980s Jefferson House office block, was acquired by a company named Silver Bloom when it was marketed for sale seeking €7 million in 2015.

Initially when the building was acquired in 2016, for about €8.3 million including acquisition costs according to public accounts, Hong Kong-based investor Fergus Lynch was listed as the sole shareholder of Silver Bloom.

According to the most recent shareholding information available for the company, Mr Lynch is now a minority shareholder, holding less than 30 per cent of shares, with the remaining majority of shares held by four other individuals.

Tech tycoons Annrai O’Toole and Colin Newman, who founded Cape Clear Software, a company that was bought up by tech giant Workday in 2008, have substantial shareholdings, as does a family member of David Clarke, another founder of Cape Clear and Workday’s chief technology officer, Puneet Malhi, a London-based banker, is the fifth shareholder.

Even if the investors have to revise the height of the proposed development downward from the ambitious 11 storeys sought initially, it appears Jefferson House’s days are numbered.

It was developed in 1982 by Batheaston, a company linked to developer Ken Rohan, and Tony Vaughan’s Stillorgan Securities. Jefferson House was originally named Brook House and was intended to be the headquarters for the former Smurfit Paribas Bank, a joint venture between the Jefferson Smurfit Group and French banking group Paribas.

The Smurfit group took a 35-year lease on the premises but the story goes that its plans to base the bank there were put paid to by the French, who balked at the prospect of being situated in suburbia and opted instead for the late hotelier PV Doyle’s stately office block at 94 St Stephen’s Green.

Various companies within the Smurfit group went on to occupy Jefferson House for decades and ownership of the building traded hands on numerous occasions including a sale by Rohan to Irish Life in 1990, a sale to Treasury Holdings and Jermyn Investments in 1995 for €3.175 million and a quiet sale to private investors in 2005 for €11 million.

While leafy Eglinton Road is best known for its stately red-brick homes, Jefferson House, standing tall at five-storeys over basement level, has provoked the ire of local residents since planning was first granted in the 1970s. Dublin City Council’s decision to grant planning permission was described on these pages as a “flash of unparalleled insanity” and the building was widely branded a “monstrosity” following its completion.

Various local residents have objected to Silver Bloom’s plans. Chief among their gripes is the supposedly excessive density of the plans along with the height of the development. Both aggrieved locals and the wider development community will be eagerly awaiting the outcome of the appeal to the planning board.

Do we need to be concerned about taking a Covid-19 vaccine?
8